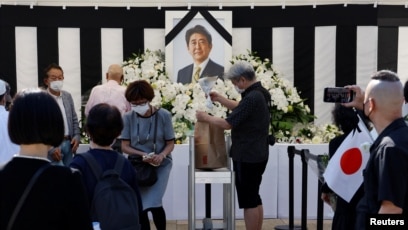 Leaders from around the world are gathering in Tokyo for a state funeral for Japan’s slain former prime minister Shinzo Abe.

The 67-year-old politician, Japan’s longest-serving PM, was gunned down at an election rally in July.

Some 20,000 police officers are reportedly being deployed for Tuesday’s event – security is exceptionally tight given that police admitted to flaws in the protection provided to Abe in July.

But the event – which is estimated to cost taxpayers $1.65billion yen – faces a huge backlash in Japan, a sign of Abe’s complicated legacy.

The new alliances he forged to respond to China’s growing power came alongside big and unpopular changes to Japan’s pacifist constitution.

His funeral also comes as Japan’s currency the yen slid to a 24-year-low against the dollar earlier last week.