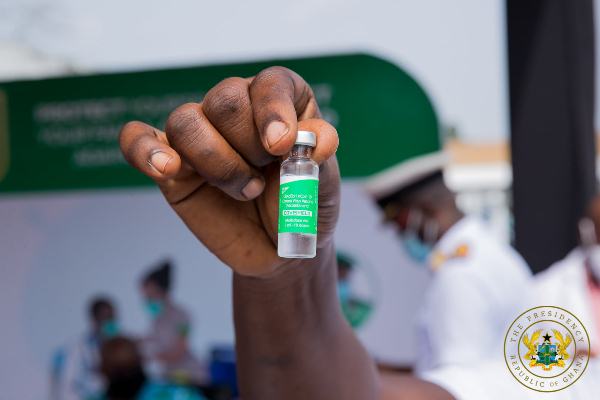 Almost all 600,000 doses of the Oxford AstraZeneca vaccine received from the COVAX facility have been distributed in the first phase of the vaccination exercise.

Programme Manager of the Extended Programme on Immunization (EPI), Dr Kwame Amponsah-Achiano, said the first consignment received in February were almost exhausted and, so far, the programme had not received any report of vaccine rejection in any of the 43 districts they were deployed to.

He told the Ghana News Agency in an interview in Accra that there was more pressure on the vaccine now than before with less than five per cent wastage recorded.

Dr Amponsah-Achiano said the EPI would, from next week, begin vaccination of all health workers in all the 16 regions adding that the Ghana Health Service was happy with the outcome of the first phase.

”The initial hesitancy was quiet problematic, but between the time we received the vaccine and the time we started the roll out, a lot has changed, the apprehension went down, and so far we have distributed all the vaccines,” he said.

He said the country had already taken delivery of 15,000 doses of the Sputnik V COVID-19 vaccine from Russia but it was not in use presently.

Dr Amponsah-Achiano said between now and May, Ghana would receive additional two million doses of vaccine from the COVAX facility in bits, which could vaccinate three per cent of the population.

He said Ghana was discussing with the manufactures of Sputnik V to get additional doses, after which they would be administered to the public.

”We also hope to get additional doses of the AstraZeneca vaccine through other multiple sources including the 17,000 doses announced by the President,” he said.

Coronaviruses are a large group of viruses that are common among animals. In rare cases, they are what scientists call zoonotic, meaning they can be transmitted from animals to humans, according to the US Centers for Disease Control and Prevention.

It has an incubation period of four to six days and fatal, especially for those with a weakened immune system – the elderly and the very young. It could also result in pneumonia and bronchitis.