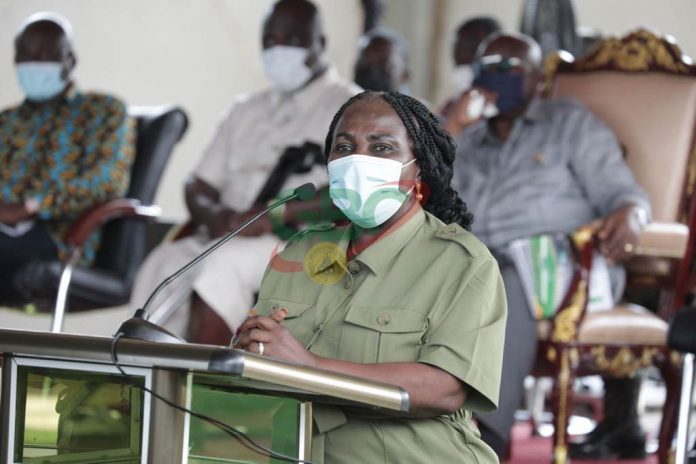 Government will fully address the menace of accumulated waste in communities as part of its sanitation fight, Madam Cecilia Dapaah, Minister for Sanitation and Water Resources has said.

She said overflowing waste-dumping sites had long affected sanitation outcomes and land use, and that the Government had taken a drive towards total waste management.

The Minister was inspecting the construction of a multimillion cedis intergraded waste treatment facility in the Volta Region, a nationwide initiative which she said was born out of the President’s vision to make Ghana a clean city.

She said the Ministry had taken on some of the oldest landfills in the country in an effort to reclaimed vast lands for farming.

“We realized that these were posing very serious challenges to the wealth and health of the people and we are lucky that very soon we are going to have a second phase of this project, so that we can clear all these mountains from the environment. Because now the new model we are rolling out with the collaboration of the private sector, is to have the full chain of waste management,” Madam Dapaah said.

The Minister reassured that Government facilitated private investments in the waste sector to help score the ultimate in Water Sanitation and Hygiene (WASH).

She said, “the WASH sector is open for other entities and individuals to also invest. Others must take the risk and invest in the sector because your efforts will not be in vain.

Madam Dapaah said research and training centres that formed part of the integrated compost project, anticipating the enhancement in research and waste management.

Dr. Joseph Siaw Agyepong, CEO of Jospong Group of companies, which is partnering government on the integrated waste treatment project, thanked President Nana Addo Dankwa Akufo Addo for his “confidence and support for the private sector”.

He said the commitment of stakeholders including the sector minister, made possible the realization of the waste treatment facilities, which when completed, would help communities live in clean environments.

The Volta Integrated Waste Treatment Facility is a GHC15million complex being constructed to process among others, plastic, and medical waste, and is currently at about 65 per cent complete.