Spokesperson for the National Chief Imam, Sheikh Aremeyaw Shaibu has said that, the Greater Accra Regional Minister and Member of Parliament for Ayawaso Central Constituency, Henry Quartey has given an indication that he is someone with , ”unweaving  principles”.

According to him, the Regional Minister has succeeded in doing what others could not do during their tenure.

“He has given a sense that he is somebody who can be resolute and be consistent with his work and his principles and doing what others could not”, he said.

Sheikh Aremeyaw Shaibu made the point following, the declaration of “war” by the Greater Accra Regional Coordinating Council and the Accra Metropolitan Authority on recalcitrant drivers and traders from effective February 1, 2022.

The Greater Accra Regional Coordinating Council and the Accra Metropolitan Authority have vowed to clamp down on activities of drivers and traders which often create indiscipline situations within the city.

Truth be told, several attempts to ensure sanity had often proven futile. This is why, this time round the authorities have decided to leave no stone unturned.

The issue was discussed during the Headlines Segment on the GTV Breakfast Show on January 27, 2022.

As part of ‘Operation Clean Your Frontage Campaign’‘, which kick starts on February 1st, 2022 at the Central Business District, Ashaiman and the Tema Metropolitan areas, the Minister has given a five-day Ultimatum to Commercial Drivers and Traders who have refused to use lorry stations and markets to ply their trade, to refrain from doing so before the said date.

The relocation of Onion traders from Agbogbloshie to Adjen Kotoku, the Operation Clean Your Frontage, the massive decongestion of unauthorized structures in Accra and the ban placed on tricycles that ply the Motorway are some of the Minister’s achievements.

Sheikh Aremeyaw Shaibu described the Minister’s actions as a true definition of leadership.

He said that one must not violate orders in order to survive.

“That one must survive is no justification to violate orders in society, when we all must move centripetally”, he opined.

Sheikh Aremeyaw Shaibu called on all not to interfere in the Minister’s business, instead allow him to do his work, to ensure discipline in the city.

“Hands off the Honorable Henry Quartey. Let him do his work”, he stated. 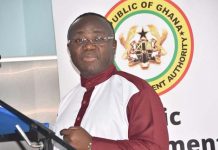 Agyenim Boateng Adjei pleaded not guilty to 18 counts of use of public office...

WHO says World’s First Malaria vaccine is a historic moment!