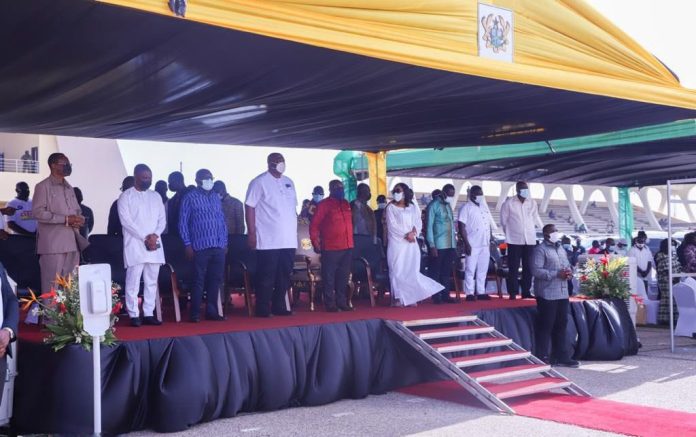 President Akufo-Addo has called for an attitudinal change in fixing the challenges facing the country. He said logistics and bye laws alone cannot address the problems confronting the country and called on all to change their attitudes and behavior.

President Akufo-Addo made the call when he launched the ‘Operation Clean your Frontage’ campaign in Accra on day 2 of his Greater Accra Regional tour.

Bright Ntramah reports that the “Let’s Make Greater Accra Work’’, is a transformational agenda that seeks to mobilize and empower all urban actors to respond to the region’s waste management and sanitation challenges.

The Agenda was mooted by the Regional Coordinating Council under the leadership of the Minister Henry Quartey. One of the interventions under the Agenda “Let’s Make Greater Accra Work” is the “Operation Clean Your Frontage” campaign which would make it mandatory for Property Owners, public Institutions and the citizens to clean and green their frontage and all open spaces around their property.

Some of the strategic interventions under the “Operation Clean your Frontage” campaign includes: By-laws on cleaning of the frontage of premises formulated and gazette, Evacuation of accumulated refuse at sanitary sites and other locations, transfer stations in MMDAs, daily sweeping of streets, curbs, walkways, and Picking of litter from walkways, road medians and open spaces among others.

“Government will provide the necessary resources for it to succeed,” the President noted.

He called on all to join the campaign to ensure its success.

Zoomlion has thrown its weight behind the campaign. The organization has promised to support the campaign with vehicles, tricycles, and more than 100 thousand waste bins.

Joe Wise gets emotional as he promises to care for physically...