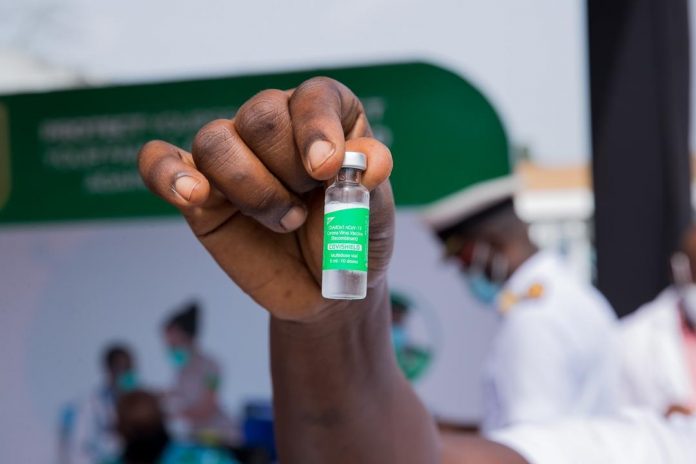 Three persons have been arrested for their alleged involvement in the stealing and sale of COVID-19 (COVISHIELD) vaccines in Ghana.

The three were arrested by National Security officials.

A fourth suspect, a Disease Control Officer at the La Bawalashie Polyclinic, Lord Pabitey is now at large and the security officers are on a manhunt for him.

Allotey is said to have received the stolen COVIDSHIELD from Pabitey and Dzisenu and then allegedly administered the vaccines at a cost of GH¢200 per jab.

Gaisie on his part is being held for abetment of crime.

The three – Dzisenu, Gaisie and Allotey – have been remanded into custody by an Accra Circuit Court to reappear on April 1, 2021.

Prosecuting, Detective Sergeant Frederick Sarpong, prayed the Court, presided over by Mrs. Afia Owusuaa, not to take the pleas of the accused persons as investigations were ongoing and efforts were underway to arrest others believed to be involved in the crime.

Charges of the accused were not read out to them. However the facts of the case were read out in open court.

Detective Sergeant Sarpong said accused persons, when granted bail may not only interfere with investigations but other witnesses.

He said from the facts, other persons involved were yet to be arrested and prayed the Court to remand them.

Lawyers of the accused persons prayed for bail, saying their clients were servants of the Republic and they would not do anything to interfere with investigations.

According to the lawyers, the accused had fixed places of abode and people who would stand as sureties for them when granted bail.

The Court turned down the bail application put in by defence counsel, and said it was inclined by the facts the prosecution had told the Court that other accused persons were yet to be arrested and investigations ongoing.

The facts as presented by the prosecution were that the complainants were National Security Operatives.

The prosecution said during the first week of March this year, the operatives received intelligence that some health officials had been stealing and selling the Covid-19 vaccines brought in by the Government of Ghana.

Detective Sergeant Sarpong said through intelligence, Allotey’s name was mentioned and his phone number obtained as the one who injects the Covid-19 vaccines for a fee.

The prosecution said on March 16 this year, Allotey was arrested when he was invited to Labone in Accra to inject the complainant at a fee of GH¢200.00.

He said when Allotey was searched, eight COVIDSHIELD vials, eight used COVIDSHIELD, 173 pieces of 0.5 ml unused injection syringes and cotton were found on him.

The prosecution said during interrogation, Allotey mentioned Dzisenu and Pabitey as his source.

He said Allotey led the National Security operatives to arrest Dzisenu and Gaisie.

The prosecution said Allotey, in his investigative caution statement, admitted buying 36 of the vials of government procured COVIDSHIELD vaccine at the cost of GH¢18,000.00.

According to him, Allotey further said that, he sold 20 of the vials of COVIDSHIELD at a cost of GH¢16,000.00 and later returned 15 vials to Dzisenu.

The prosecution said Allotey said he also bought 26 vials of the COVIDSHIELD from Pabitey at the cost GH¢4,800.00.

Mr Sarpong said Dzisenu in his caution statement, mentioned Gaisie as the one who aided and facilitated the sale of the stolen CONVIDSHIELD vaccines to Allotey.

The Prosecution said efforts were underway to arrest Pabitey and others.