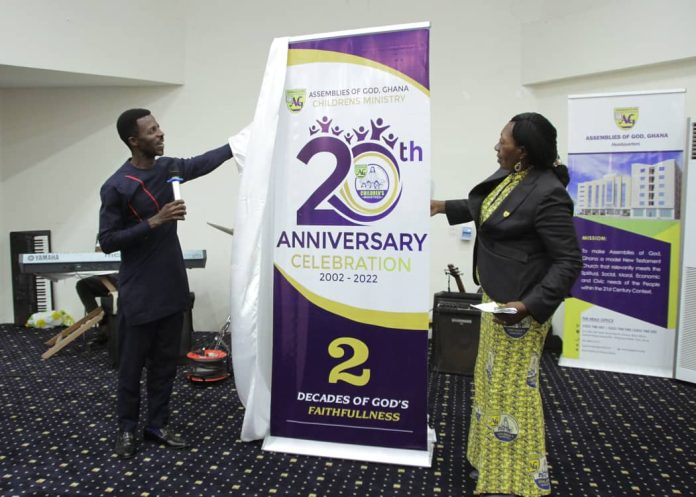 It is often said children are the future of a nation which is why some religious leaders have advised parents to be careful of how they treat their children. According to the Former Head of Operations at Assemblies of God Rev. Dr Abraham Obeng Adomako, if Ghanaians want a better Society, it is incumbent on parents and guardians to imbibe in children, values that will help them shape their mindset towards a better future.

“Children are not an island in their own, that is why God gave them parents and so it is their duty to train these children if we want a better and functioning society devoid of corruption”.

Rev. Dr Abraham Obeng Adomako who made the point, during the launch of the 20th Anniversary of the Assemblies of God’s Children’s Ministry cautioned parents not to impose decisions on their children, but, train them to become responsible adults in future to make the world a better place for all.

He also urged the Church not to neglect children when they come to church rather engage them in such activities that way, they will lead a moral life which will better the society through the careers they choose.

While advising parents, Rev Dr. Obeng Adomako also said there are other things that are competing with the training given by parents, in terms of grabbing the attention of their children and so they should be careful. He however entreated children to allow themselves to be guided.

The Assemblies of God’s Children Ministry has existed for many years, operating under the Church’s Sunday School Department, but in 2002, it was official made an independent department with its own national and regional leadership in the church.

Since then, the Children’s Ministry has impacted the lives of many through training of children. At the launch of the 20th Anniversary of the Assemblies of God’s Children’s Ministry, National Director of the Department, Rev. Mark Okyere Kesse said a lot of activities such as games, quizzes and ultimately the recitation of the book of Ephesians is being held. He added that there will be a lot of give away for participants.

Rev. Kesse said the Assemblies of God in his quest to develop society has through constant training of the children impacted Society positively.

Some of the children who shared their experiences with GBC News said the Children’s Ministry has really transformed all facets of their lives.

There are a lot of children roaming on the streets who need attention to better people for society, therefore all hands must be on deck to groom them for the Church and the country as a whole. Everywhere in the world especially Africa, children are referred to as the eyes of a country, because it is believed they will take over from the current leaders.

No trader will be displaced – AMA Chief Executive