President Akufo-Addo insists former President Mahama is bent on cancelling the Free SHS Policy being implemented by his government. He...
Read more

Coronavirus: Germany and France to decide on new lockdowns

In Germany, it is being termed a "lockdown light" for November while in France a four-week lockdown is expected...
Read more

They are made up of four legumes namely Mung Bean, Moth bean, Horsegram and Dolichous from India; and collections of Bambara groundnut and Cowpea from India, Mali, Niger, Ghana, Nigeria, Burkina Faso, Uganda, Senegal and Tanzania.

The four legumes from India were new to the farmers and so they were more interested to know more about their field performances in terms of maturity period, pod load, resistance to pests and diseases and other traits of importance to them.

The project is sponsored by the Kirkhouse Trust in Ghana and is led by CSIR-Plant Genetics Resources Research Institute (CSIR-PGRRI).

Ninety-six farmers from Binduri District and Bawku Municipal were invited to the project site in Manga Station of CSIR-SARI for a field day.

In an interview with GBC URA Radio, the CO-PI of the project, Dr. Francis Kusi, on behalf of the Director of CSIR-PGRRI, Dr. Lawrence Aboagye Misa, said population in the Sudan Savanna areas keep increasing yet the productive land for food production keep decreasing due to the type of settlement and the compound farming system in the area.

This presents a serious challenge to Agriculture Research Scientist to develop technologies that will increase the productivity of the available farmlands to ensure availability of adequate food for the ever-increasing population.

He added that among these technologies include introduction and development of stress tolerant extra early and high yielding varieties. These will not just generate food early in the season to address the hunger gab, but could be produced several times (at least 4 times) in a year to increase the productivity of the limited farm land to ensure availability of adequate nutritionally rich food in the dry Savannah zone of Ghana all the time.

The farmers were conducted round the fields of the four stress tolerant legumes by the scientists and Technicians to critically evaluate the different legumes and the accessions.

At the end of the day, the farmers selected their best legume(s) and the most preferred accessories out of the 50 accessories of Mung bean, 39 of Mothbean, 21 of Horsegram, and 15 accessions of Dolichous. 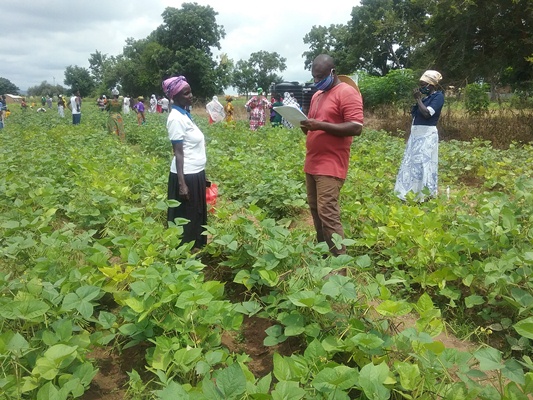 The Mung bean emerged as the best legumes to almost all the farmers. The farmers indicated that they selected Mung bean because it’s extra early, maturing at 45 days after planting, flower continuously due to its indeterminate flowing that ensure that it keep podding so long as moisture is available.

They also saw it as a legume that they can be cultivated several times in a year to produce more food to feed their families and to generate income.

The farmers informed the media that Mung bean could serve as one of the important cash crops to them if there is ready market for it in Ghana.

Coronavirus: Germany and France to decide on new lockdowns

In Germany, it is being termed a "lockdown light" for November while in France a four-week lockdown is expected but less severe than in...
Read more
Election

The Country Director of Makarios Foundation has asked the Ghana Health Service not to lose sight of its fight against the malaria parasite since...
Read more

The Ghana Chamber of Construction Industry has warned of a pending strike and deconstruction should government fail to address its concern within the next...
Read more

The Mayor of Accra, Mohammed Adjei Sowah has unveiled Accra as the commercial capital of Africa. The unveiling was done at the ongoing 4th Ghana...
Read more

The Northern Regional Minister, Salifu Saeed has commended the Akufo-Addo led government for measures put in place to ensure that peace prevails in the...
Read more

The Intercity STC Coaches Limited on Tuesday received 100 new buses from the government for it to be added to its fleet. This makes it...
Read more