By Bubu Klinogo, a Journalist.

Last Thursday, the government presented the nation’s budget statement through the Minister for Finance, Ken Ofori-Atta to the people of Ghana at the Assembly of the representatives of the people at Parliament.

This is in accordance with Article 179 of the 1992 Constitution and Section 21 (3) of the Public Financial Management Act, 2016, (Act 921), which mandates the Minister for Finance, on behalf of the President to lay before Parliament, the ensuing year’s Budget Statement and Economic Policy of the Government. A budget is an estimate of income and expenditure for a set period. It could also be defined as “a tool that managers use to plan and control the use of scarce resources. A budget is a plan showing the company’s objectives and how management intends to acquire and use resources to attain those aims and objectives”.

The presentation primarily focused on expanding on the economy’s recovery from the COVID-19 pandemic, as well as creating a climate-friendly entrepreneurial state to address unemployment and import substitution Digitalization of the economy, skills development and entrepreneurship also featured prominently.

Some key national economic issues such as the expansion of the tax net which has been the bane of the nation were also addressed. According to the Minister for Finance, Government services are to see at least a 15% upward adjustment when the budget is approved by Parliament.

The Minister also announced the intention of the Government to the abolishment of Tolls on all public roads in the country and a 1.75 percent charge on all electronic financial transactions has been introduced subject to approval by parliament.

Another fascinating feature in the statement is that one million jobs are said to be created under a newly introduced initiative dubbed ‘YouStart’, with a seed capital of GHS1 billion under this scheme, one billion Ghana Cedis is proposed each year to catalyze an ecosystem to create one million jobs and in partnership with the Finance Institutions and Development Partners, raise another two billion cedis,

This certainly, when materialized, will go a long way to help solve one of the major challenges of the country at the moment. Even though Ghana is not found in the first twenty countries with the highest unemployment rate it is said to be one of the countries in the world with a high number or proportion of unemployed people.

According to the Trading Economics Global Macro Models and Analysts Expectations, the unemployment rate is expected to reach 4.60 percent by the end of this year. Ghana Unemployment Rate is projected to trend around 4.40 percent in 2022 and 4.20 percent in 2023, The challenge is that, since we share a border with Burkina Faso, the country with the highest unemployment rate in the world, the negative effect may compound Ghana’s problems.

The mandate of the National Youth Authority, NY, is to spearhead the comprehensive development of Ghanaian youth through the formulation and implementation of various empowerment policies and to enhance the capacity of the youth to participate in decision-making at all levels.

The NYA fully recognizes that the fulfillment of its mandate depends on a collaborative effort between the Authority and its sister agencies and thus commends the YEA for this initiative geared towards securing the economic development of Ghanian youth. The recent Job and Career Fair 2021 organised by the Youth Empowerment Agency (YEA) in September at the Accra International Conference Center and the commotions at the force’s recruitment are pointers to arm the government to find lasting solutions to unemployment challenges in the country, especially among the youth.

According to the World Bank collection of development indicators, graduates from tertiary education in Ghana were reported at 109,874 in 2018. Not more than three percent of these were absorbed into the formal sector. Employment creation is one area, this government has something to show by way of success, though not enough.

According to Census and Economic Information Center (CEIC), Ghana`s Unemployment Rate is within an average rate of 5.73%. it increased to 4.53% in Dec 2020, from the previously reported figure of 4.12% in Dec 2019. The data reached an all-time high of 10.36% in Dec 2000 and a record low of 4.12% in Dec 2019 This is why the government must be commended and supported to continue with its drive to reduce the nation’s unemployment figures. The urgent need for such initiatives like the YouStart to propel people into the informal sector economy is highly welcome.

Many more people will be within the job space and thereby be taxed to widen the tax net to date, less than 10 percent of Ghana’s 30.8 million population pay direct taxes and in the words of the Finance Minister, “Only 2,364,348 are bearing the burden of the entire population as taxpayers”. This is not good enough and must be addressed as a matter of urgency and importance. Apparently, the COVID-19 pandemic increased public debt “the situation was made worse by the big drop in revenue collections last year. Total revenues in 2020 fell by GHȼ11.93 billion, equivalent to 3.1 percent of GDP, while total expenditures increased by GHȼ14.08 billion, equivalent to 3.7 percent of GDP.” Dubbed the “Agyenkwa Budget” we live to see if the budget will really save the nation from the current situation. 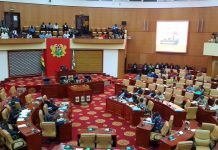 Prioritize the interest of Citizens, MPs 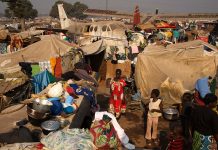 Spotlight on Refugees in Ghana

NPP can only account to Ghanaians when in opposition- Mahama

EU wants to introduce ‘right to repair’ for phones and tablets...