His appeal comes after the singer and 2 others were arrested over a hoax shooting incident.

A police statement said Shatta Wale was arrested after he turned himself in on October 19, to assist in investigations for his alleged involvement in the creation and circulation of information intended to cause fear and panic.

The Pastor whose prophecy triggered Shatta Wale’s fake shooting fiasco has also since been arrested. 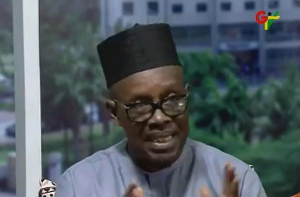 “I pray that the law goes a bit lenient on him. He has also apologised, “I don’t like musicians getting into trouble like that.”

“I think we live in a country that is governed by laws and rules and regulations. I don’t want to see musicians come in confrontation with the law and things like that,” he said on Thursday, October 21.

The legendary Highlife musician further said this should serve as a guide to all musicians and managers of artistes.

“And I think this should also be an example to all musicians to make sure whatever you do you protect yourself from such things. And also the management that manages our stars should also make sure that they don’t get into such troubles.”

He also cautioned quack pastors against making all kinds of prophecies.

“Having said that, let me also say this to the pastors who are making all kinds of prophecies. It doesn’t help at all. What about if you say this and you get it wrong. If you have something for an individual, call them and talk to them. Don’t put it out there, then it becomes like you want to ride on his fame.”

‘Do more to tell our successes’ -Kufuor to NPP