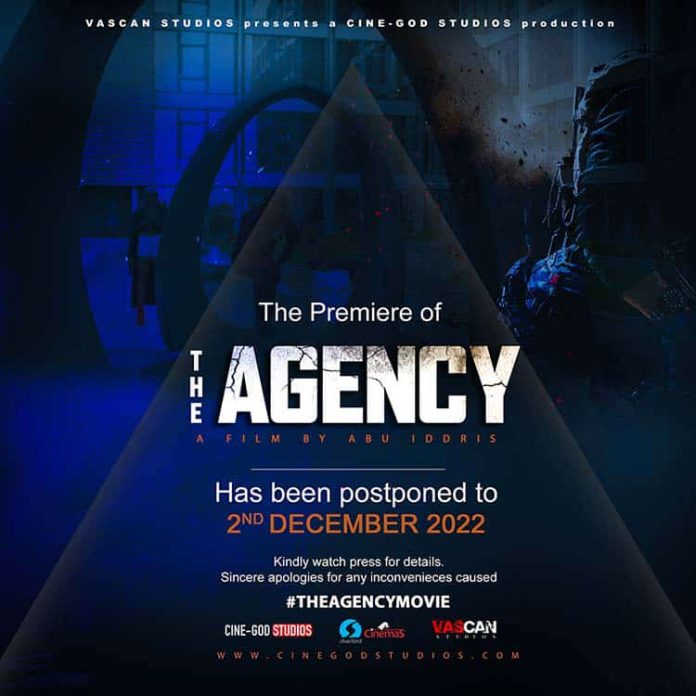 By: Adiza Bawa
Premiere of anticipated Ghanaian crime action thrillers ‘The Agency’ has been postponed to December 2, 2022.
The actual date for the premiere, 1st October, 2022 was postponed due to some challenges, including a planned renovation by Silverbird Cinemas, commencing two days after the premiere of ‘The Agency’ movie and lasting about a week. Meaning that subsequent showings of ‘The Agency’ in the cinema would have to be suspended for the entire duration of the renovation.
In a statement, it noted that from a business perspective, it is not prudent, as a break in screening, would water down the impact it anticipate audience reviews after the premiere will make, while potentially affecting revenue as well. Hence, the need to postpone to a more suitable date. In considering suitable dates, it had to ensure that the new date was not set too close to or on the same day as any major local or international event and or movie releases. This is also important because it can adversely affect the premiere.
After extensive consultations and careful consideration, it became clear that ‘The Agency’ should premiere in December. Coincidentally, the National Film Authority called on Cine-God Studios to discuss the Ghana Cinema Week slated for December 2022. The ten (10) day event seeks to revive the Ghanaian cinema culture by encouraging Ghanaians to watch Ghanaian films at various venues across the country. By supporting and participating in this initiative, we get a golden opportunity to access more screens; which means we get to bring the ‘The Agency’ movie closer to more film lovers across Ghana faster than we initially scheduled. In all, the statement added that it believes that the postponement will provide an opportunity for Ghanaians to be entertained without compromising on returns for the investor; a win-win situation. ‘The Agency’ is a crime-action thriller movie which tells the story of a very powerful government security agency, which was formed to handle the government’s top-secret operations but which gets corrupted under the leadership of a highly connected female government appointee who uses the agency for back-door business dealings, hence, causing the emergence of a group of highly skilled individuals to embark on a self-sanctioned perilous mission to end the corruption and abuse.
It was Executive produced by Amin Ramart and directed by Abu Iddris. It also encouraged and called on the public to turn out in their numbers on December 2, 2022 for the premiere at Silverbird Cinemas (Accra Mall and West Hills mall) and subsequent showings at venues near them.
CLICK HERE FOR MORE ENTERTAINMENT STORIES