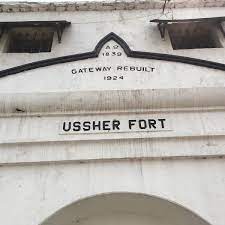 The renovated Ussher Fort Slavery Museum has been inaugurated in Accra with a call on partners to step up efforts to complete rehabilitation of forts and castles in Ghana’s coastal regions.

The Museum was first established and opened with help from UNESCO in 2007 but temporarily closed since 2014 due to infrastructural problems.

The Ambassador of the Netherlands to Ghana, Mr. Ron Striker, said the project aims to complete rehabilitation of forts and castles in the Volta, Greater Accra, Central and Western regions, as planned in the World Heritage Programme.

According to him, that called for a strong Ghanaian ownership and urged the Ghana Museums and Monuments Board to take the lead, assisted by UNESCO, with the help of all countries concerned, including the Netherlands, to achieve that aim.

The Ambassador expressed gratitude to UNESCO, the Government of Ghana, the Ghana Museums and Monuments Board, under the auspices of the Ministry of Tourism, and all the partners who contributed to achieving the goals of the rehabilitation works.

The Acting Director, Ghana Museums and Monuments Board, Mr. Ivor Agyemang Duah said, “The Ussher Fort is the very heart of Ga Mashie and we have discussed preparation towards the new management plan of the Fort with sections of the community that include our intellectual chief priest and advocates as such.”

As maintained by Mr. Duah, the Board had lined up curatorial activities and would do same with the Ussher Fort to achieve its goals.

Head of UNESCO Office in Ghana, Mr. Diallo Abdourahamane, said despite the restriction of the COVID-19 pandemic, they were able to inaugurate the Museum and pledged UNESCO’s continued support towards sustaining the African cultural heritage.

The Chief Director of Ministry of Tourism, Arts and Culture, Mr. John Yao Agbeko, in a statement read for the Minister, said concerns had been raised about the National Gallery, which was closed down for renovation close to five years now.

“I am happy to announce that 80 per cent of work has been done, and very soon work will be completed and the Gallery will be opened to the public”.

The Minister, therefore, commended the Dutch Embassy through UNESCO for their continuous support.

The UNESCO/NFiT cooperation to support World Heritage was established in 2001 by the Netherlands Ministry of Education, Culture and Sciences, and has contributed to the ongoing preparation of a management plan for the Forts and Castles of Ghana, which is funded by the International Assistance under the World Heritage Fund.

The Ussher Fort, formally called Fort Crevecoeur, was built in 1649. It started as a trade post in the 17th century but became a slave dungeon later, used by the West Indian Company.

It remained Dutch until 1868 when it was handed over to the British as part of the Anglo Gold Coast Treaty of 1867.

It was once a Police Post and a Prison. It has also served as a refugee camp for Liberian and South Sudanese refugees.

Today, it is a component of the serial World Heritage property, “Forts and Castles Volta, Greater Accra, Central and Western Regions” inscribed on UNESCO’s World Heritage List in 1979.

It is also on the Mutual Heritage List established by the Ghana Museums and Monument Board and the Netherlands Department of Conservation.

$700,000 earmarked for coronavirus patients and families is inadequate – Minority

Ghana, UK must finalise trade agreement to save jobs — Fairtrade...