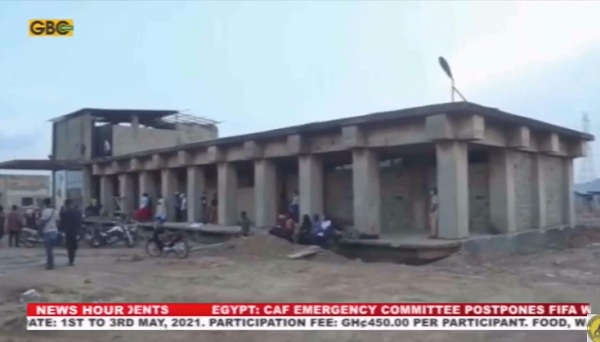 A vault that remained shrouded in mystery for nearly sixty years has finally opened for public viewing.

Initiated by Ghana’s first President, Dr. Kwame Nkrumah in the early sixties, it was abandoned after his overthrow in 1966.

The two storey underground building stood at the mercy of the weather until the founder of the Savannah Center for Contemporary Arts (SCCA), Ibrahim Mahama, purchased and renovated it.

Its location is in Nyohini (Nyoani) in Tamale, about five hundred meters South West of the Abedi Pele roundabout.

The giant concrete pillars of this structure easily leave an impression of wonder. But as one descends the steps, it is evident that the structure was built to last.

Following the 1966 Coup d’état, attempts were made to bury the structure, but it survived and even served as a source of water for residents of Nyohini, Zogbeli, Lamakara and beyond during the dry season when water is scarce.

He said he is happy to finally resurrect, put it to use and preserve it.

The Savannah Center for Contemporary Arts in collaboration with ARoS Aarhus Arts Museum in Denmark have converted the structure into an arts center to promote Ghanaian and African arts.

The collaboration will also serve as a platform for Danish artists to visit Tamale and exhibit their works.

The Danish Ambassador to Ghana, Mr. Tom Norrin, commenting on the project said, “art is actually about communicating, about being able to talk about maybe all the things that we don’t talk about when we use our normal language. But here we have an opportunity to use art as a way of communicating and finding a common ground.”

Some thirty pieces of art works and antiques, including a nearly four-thousand-year-old Egyptian coffin and the Sputnik which is the first satellite to be launched into space are currently on display at the center.