It was a showdown for the Ghana Broadcasting Corporation, GBC, at the maiden Ghana Malaria Excellence Awards as the State Broadcaster received the highest number of awards. The Corporation set the pace for the night having received five awards during the event for the distinguished role it plays in disseminating information to the public. The ceremony which was on the theme “Engendering Stakeholders Participation towards a zero malaria Ghana, formed part of yearlong activities to commemorate this year’s World Malaria Day. It was organized by the Ministry of Health, Ghana Health Service and the National Malaria Control Programme, NMCP, to recognize the role partners play in the fight against malaria in Ghana.

Malaria is a life-threatening disease caused by parasites that are transmitted to people through the bites of infected female Anopheles mosquitoes. Symptoms of the disease, includes fever, headache and chills. In 2020, there were an estimated 241 million cases of malaria worldwide. The WHO African Region carries a disproportionately high share of the global malaria burden. The region was home to 95% of malaria cases and 96% of malaria deaths. Children under 5 accounted for about 80% of all malaria deaths in the Region. In Ghana Malaria is a public health concern and continues to account for many deaths, making it one of the top ten countries with high malaria mortality threshold. Over the years the Ministry of Health through the Ghana Health service and the National Malaria Control Programme have implemented deliberate programmes to reduce the malaria burden and possible elimination. Some of these health interventions include, Vector control which focuses on insecticide-treated nets (ITNs) and indoor residual spraying (IRS). Preventive chemo-therapies which is the use of medicines, either alone or in combination, to prevent malaria infections and their consequences, and recently the RTSS Malaria Vaccine among other interventions. All these have been successful through the selflessness and sacrifices of researchers, medical doctors, Non- Governmental Organization academia, and the media. 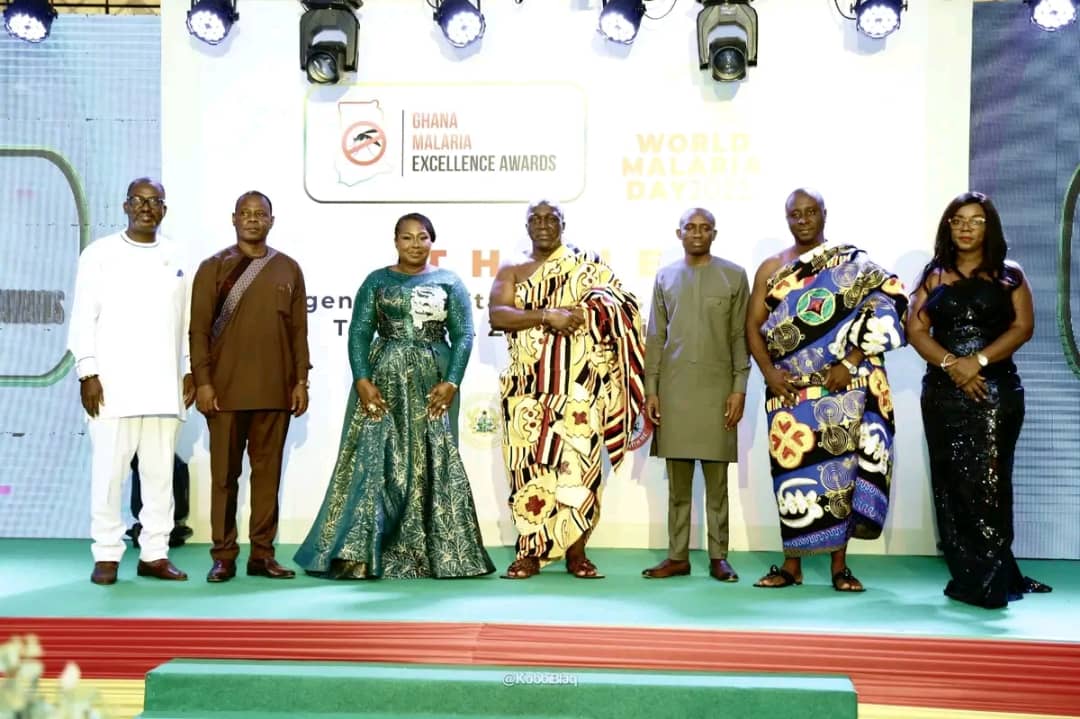 The maiden Ghana National Malaria awards was to celebrate the excellent contributions, commitment and sacrifice made by partners towards the fight against malaria. Director-General of the Ghana Health Service, Dr. Patrick Kuma Aboagye, said malaria affects all ages and is of great concern to many countries especially Africa. He said the awards ceremony presents a unique platform to recognize people who have been instrumental in the malaria fight.

“Significant progress has been made due to the collaboration by our stakeholders, who have contributed in diverse ways including technical support, training of critical human resources, financial support, media campaigns in disseminating related information in malaria control and prevention to targeted population to complement efforts of government in the fight against malaria in Ghana. It is therefore appropriate for a special ceremony such as Ghana Malaria Excellence awards to be used as a unique platform to recognize and award the excellent contribution of our stakeholders in our fight to end malaria in Ghana”.

Dr. Malm, said the national urgency attached to the Covid-19 pandemic must be applied to malaria for the needed results.

“When Covid came we realized it was urgent and we want to change the stethoscope around malaria where we see that it’s a normal disease. We have to do that because there are preventive interventions and there are tools to save people from dying from Malaria. So we want to bring the urgency to the fight against malaria”

“We are moving towards elimination and that will require a mind-set change, we have to change the policies that we set, but, everybody has to own the fight against malaria because we can’t get to elimination if it’s just being done by the Ministry of Health or it’s being done by health workers, everybody has a role to play in the fight against malaria”, Dr. Malm added.

Television personality and National Malaria Ambassador, Oheneyere Gifty Anti, said the best recognition that can be paid to pioneers in the fight against malaria is to eliminate the disease. “they spent their lives doing research, fighting, doing everything. They must witness the end of malaria in their lifetime, that will be the best reward we can ever give them and Nana with all due respect it is achievable, we can do it”. 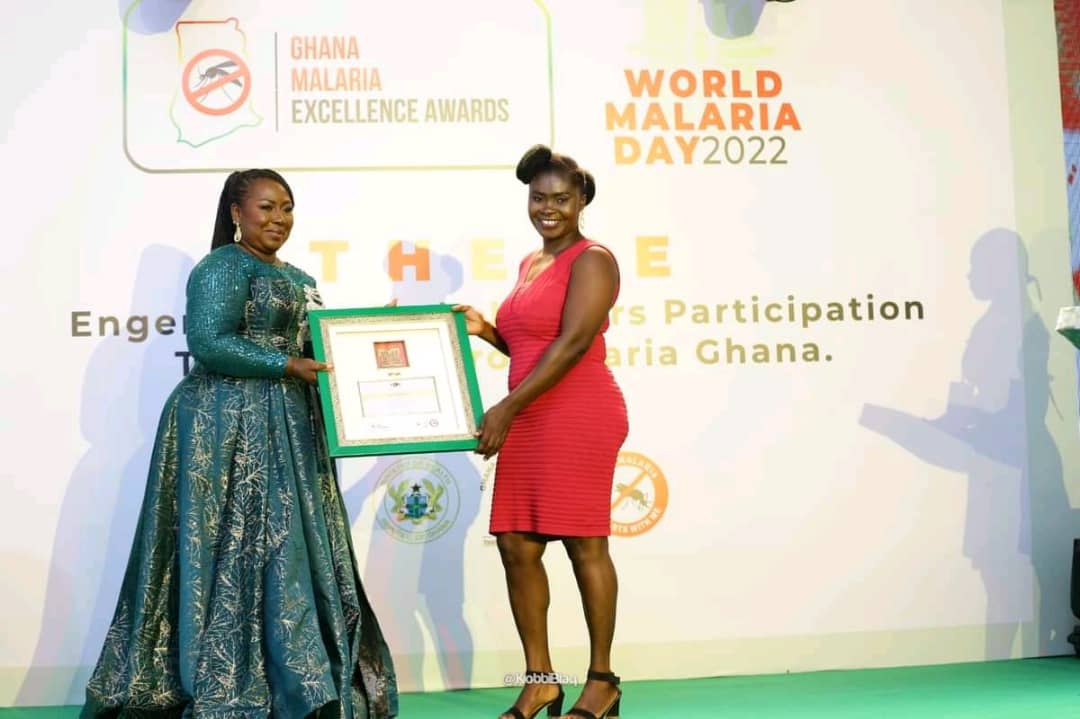 She further stated, I’ve written about my experience with Covid, when I got to the Airport on the 22nd of March, 2020, it was as if Ghana was at war, the soldiers, the Police, National Security Minister, his Deputy, all of them were there. Today we can sit here without nose mask we can also tackle malaria, it depends on all of us.

Madam Anti, said “we have the people to lead us but we need the resources, I call on government, corporate Ghana, Civil Society Organizations to drop a little in the kitty and we are ready to work.

Chief Director at the Ministry of Health, Kwabena Boadu Oku-Afari stated the awards will serve as a great memorial and hoped it will motivate others to join the fight to eliminate malaria.

“Allow me to congratulate the awardees for the great work done and also call on all to continue to support the National Malaria Control Programme to carry out it’s mandate, to expand access to all interventions to reach everyone and most importantly intensify the advocacy to raise the required resources necessary to achieve the national malaria control target”.

Mr. Oku-Afari added “Government Private Sector individuals and indeed all stakeholders have a role to play towards malaria elimination in Ghana, let us all rise and build a national coalition to build to move this agenda forward, bearing in mind the fight against malaria is one that we can all win together”.W
With live band music from the Legon Nkwanpa Band the ceremony commenced with Excellence in Media category. For five consecutive times GBC was on the stage for an award making it sit on top of the honour roll. Ghana Broadcasting Corporation received the Media Institution of Excellence in Malaria reporting Award in both the Radio and Television categories, whiles three of its staff also received individual recognition for their exceptional reportage on malaria. They included Rachel Kakraba, Mavis Offei Acheampong and Nicholas Osei-Wusu. They each received citation and a laptop. 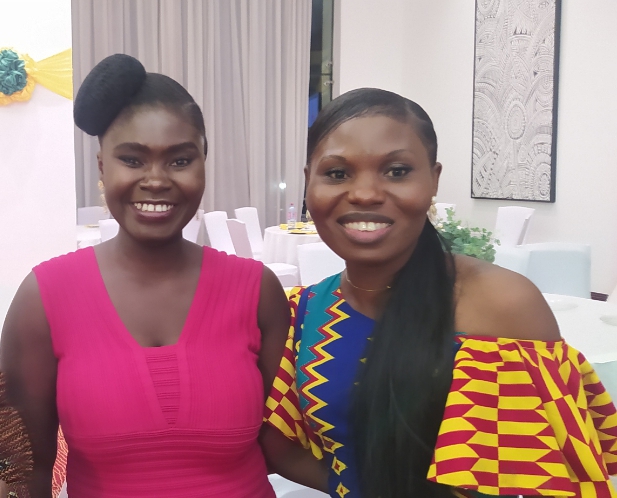 In an interview with gbcghanaonline, Rachel Kakraba, said, ”this award is an encouragement, an inspiration to do more in terms of malaria elimination. I want to say thank you to God almighty for this recognition, the National Malaria Control Programme and most definitely not forgetting my bosses, my Editors at the Ghana Broadcasting Corporation for giving me this platform. I would continuously work towards the elimination of malaria”.

For Mavis Offei Acheampong “its good to know that the work that you do in your small corner is being appreciated or it’s being seen by other entities. Journalism is all about commitment, it’s all about passion, it’s all about creativity, it’s all about hard work, when you do a good work people will see and they will appreciate it. GBC will continue to project malaria issues”, she noted,

For his part, Nicholas Osei-Wusu said, “I was just reminded the story that had won me this recognition had to do with a story I did that focused on the importance of the SP. That is a certain medication that is given to pregnant women for the first trimester of their pregnancy till the time they deliver and that is to protect both the mother and the baby against contracting or getting infected with malaria. That has been a very important intervention in curbing maternal and child mortality in terms of malaria”. 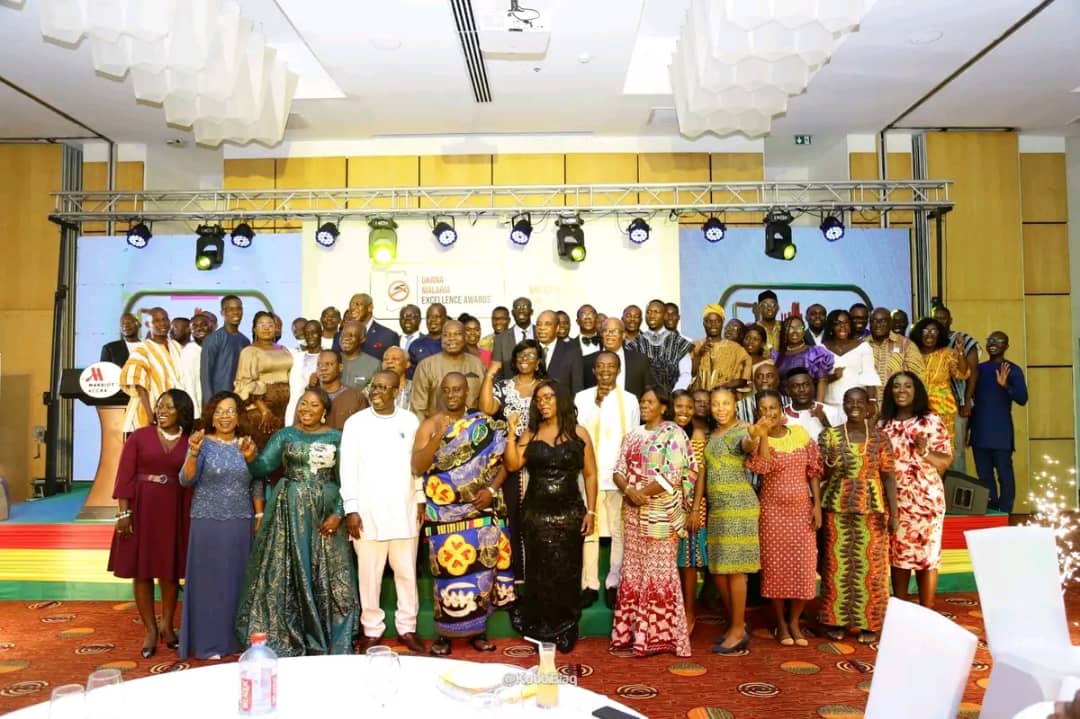 A highlight event of the awards ceremony was recognition of some pioneers in the fight against malaria. For many of them who are now on retirement the recognition while they are alive is gratifying.
A former Programmes Manager, National Malaria Control Programme, NMCP, Dr. Constance Bart-Plange acknowledged the award comes with so much nostalgia. She was grateful to all those who helped her through her journey at the programme, especially Prof. Fred Newton Binka”

“All the people here helped us but I want to single out Prof. Binka, who first mentioned my name to the then Minister of Health and said he had heard me speak about a research dissemination and the recommendation that he has made, he knows that if they choose me to head the programme, Malaria is going to see success. Thank you all for this day and I’m grateful to my family that suffered and toiled. Somehow I’m feeling sad that my late husband is not here, because he used to toil with us deep into the night”.

A former Deputy Director-General of the Ghana Health Service, Dr. George Amofa, noted selflessness of the pioneers is what has made the National Malaria Control Programme which is leading Ghana’s fight against malaria what it is today.

“Hard work and sacrifices has made what the programme is today. We just persisted and won that proposal. Not only winning but you see the success of the Programme was that because it was done by local people not consultants from outside, but by Ghanaians sacrificing their time and other things we were able to implement them to the satisfaction of global fund”.

A Clinical Epidemiologist, Prof. Fred Binka who was also recognized on the night noted a change in the efforts in malaria control will ensure an end to malaria in Ghana.

Prof. Binka further stated “at the peak of Covid, I was in China for a month in May and we certified China free of malaria. 1.4 billion people have eliminated malaria with the current tools and we can do it”.

Receiving his recognition a Former Director-General of the Ghana Health Service Prof. Agyemang Badu Akosa, said “these are the kind of people that the health Service still needs, very fit. But in this country you’re made to go and stay at home because you’ve gone past sixty. Of course as far as malaria research is concerned all the guys are here”.

The first Ghana Malaria Excellence Awards also rewarded health facilities in both private and public sectors for contributing immensely to the fight against malaria. Undoubtedly the award is a call to duty to do more.

Union of Journalists for African Press to relocate HQ from Cote...

WhatsApp to switch off messages for all who reject new terms