By: Henrietta Afful Additional information: BBC "Let's continue to pray for our brother Christian Atsu and his club director." This is...
Read more

President Akufo-Addo has added his prayers to that of many Ghanaians for God to protect the life of Black...
Read more

By Tilda Acorlor The apex league of the Volta Regional Football Association (VRFA) the Division Two League will have its...
Read more

It will be a somber day today in Appiatse, as the community commemorates a year anniversary of the disaster that befell it, on January 20, 2022. The aftermath of a vehicular accident was soon to become more bizarre as it razed an entire community, making the day one of the darkest days in Ghana’s history. Aside from the dozens of casualties, the disaster also displaced many, which meant help was needed and it was one that needed to be fast tracked, to prevent more people from dying from the trauma.

Disaster struck Appiatse, a mining community between Bogoso and Bawdie in the Prestea Huni Valley Municipality in the Western Region. This was when a vehicle carrying mining explosives collided with a motorcycle, resulting in a fatal explosion that ruined the entire community. Thirteen people including a 15-month-old baby lost their lives while dozens were severely injured.

Mass burial was organized for some of the dead, while some families opted for private burials.

Whereas medical bills of the injured were at no cost to the victims or their immediate families, the incident was one that was traumatizing for survivors. 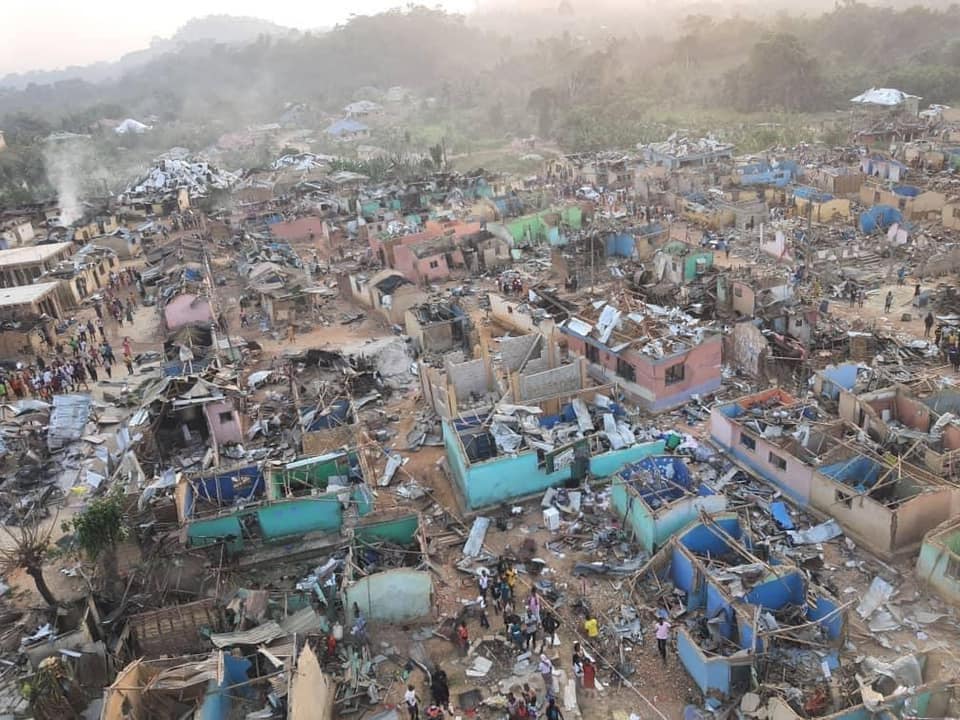 Left with no roofs over their heads, life threatening injuries, children out of school, no food, clothes or cash, external help was needed in earnest.

The state led efforts at ameliorating the suffering of the people, through the launch of the Appiatse Support Fund, which saw corporate Ghana, Non-governmental Organizations, and individuals donate to bring some relief to the community.

In February 2022, Maxam Ghana Limited which was at the centre of the disaster was fined six million dollars for regulatory breaches regarding the manufacture, storage, and transportation of explosives for mining and other civil works. A major hurdle now was how to resettle the displaced and to get the community back to normalcy.

The Minister of Lands and Natural Resources, Samuel Abu Jinapor inaugurated a committee to spearhead the process. It’s been a year now, and some of the victims are yet to recover from their injuries.

A year into the disaster is enough to revisit the government’s promise to rebuild Appiatse into a model community.

Deputy Minister of Lands and Natural Resources who doubles as Chairman of the Appiatse Reconstruction Implementation Team, Benito Owusu-Bio gives an update on this, saying September 2023, is the reviewed date for the completion of one hundred and twenty-four housing units, which is the first phase of the remodeled Appiatse township.

Activities outlined to commemorate the first anniversary, include a vigil, memorial prayer and wreath laying ceremony, as well as a thanksgiving service.

Certainly, the magnitude of the accident at Appiatse which rendered the community a dead town, and subsequent benevolence of people in donating to alleviate the suffering of residents is one that deserves Thanksgiving from God.

As a country we hope lessons learnt would not to be taken for granted, to ensure we never again experience this.

By: Henrietta Afful Additional information: BBC "Let's continue to pray for our brother Christian Atsu and his club director." This is...
Read more
General

President Akufo-Addo has added his prayers to that of many Ghanaians for God to protect the life of Black Stars player, Christian Atsu, following...
Read more
News

By Tilda Acorlor The apex league of the Volta Regional Football Association (VRFA) the Division Two League will have its name changed to "Adonai Estate...
Read more
News

UN Secretary-General Antonio Guterres said Monday that he was "deeply saddened" to hear of the extensive loss of life in Türkiye and Syria after...
Read more
General

By Charles Sarpong Amponsah President Akufo-Addo has joined many Ghanaians in praying for the safety of former Chelsea and Newcastle forward Christian Atsu, who has...
Read more

The breakdown of the family systems, parental neglect of responsibilities toward children, and peer pressure have been identified as major factors contributing to the...
Read more

By Rebecca Sedinam Affor "Asylum" in Ga language means a place where mad people are kept, but a suburb of the Greater Accra Region is...
Read more

By: Rebecca Ekpe & Clifford Okyere The promulgation of Ghana’s 1992 Constitution gave life to a pluralistic Media in Ghana. Before then only the State...
Read more

About one thousand women belonging to the Sunkpa Shea Women’s Cooperative in Murugu in the Savannah Region of Ghana least expected to gain international...
Read more