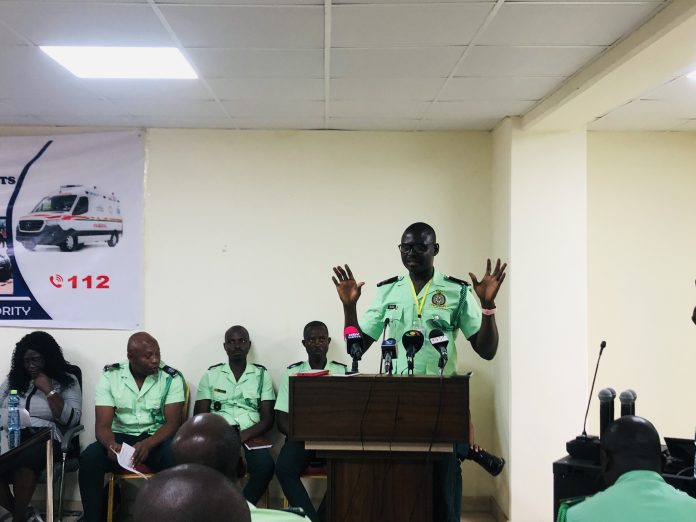 The Emergency Medical Technologists Association of Ghana, EMTAG has expressed its displeasure on the incessant attacks on EMTs in their operational duties. It is therefore Calling on the Ghana Police Service to as a matter of urgency institute measures to insulate its members to have confidence in performing their duties.

“ In all these incidents our members who are usually on board the ambulances giving care to the injured and critically ill patients are abused and physically assaulted. As an Association we wish to condemn this dastardly act and call on all relevant stakeholders such as the DISEC, MUSEC, REGSEC, National Security and the Ghana Police Service to as a matter of urgency institute measures to insulate our members to have the confidence in performing their duties. We also want to appeal to all these relevant stakeholders to investigate this matter and bring the perpetrators to book.” 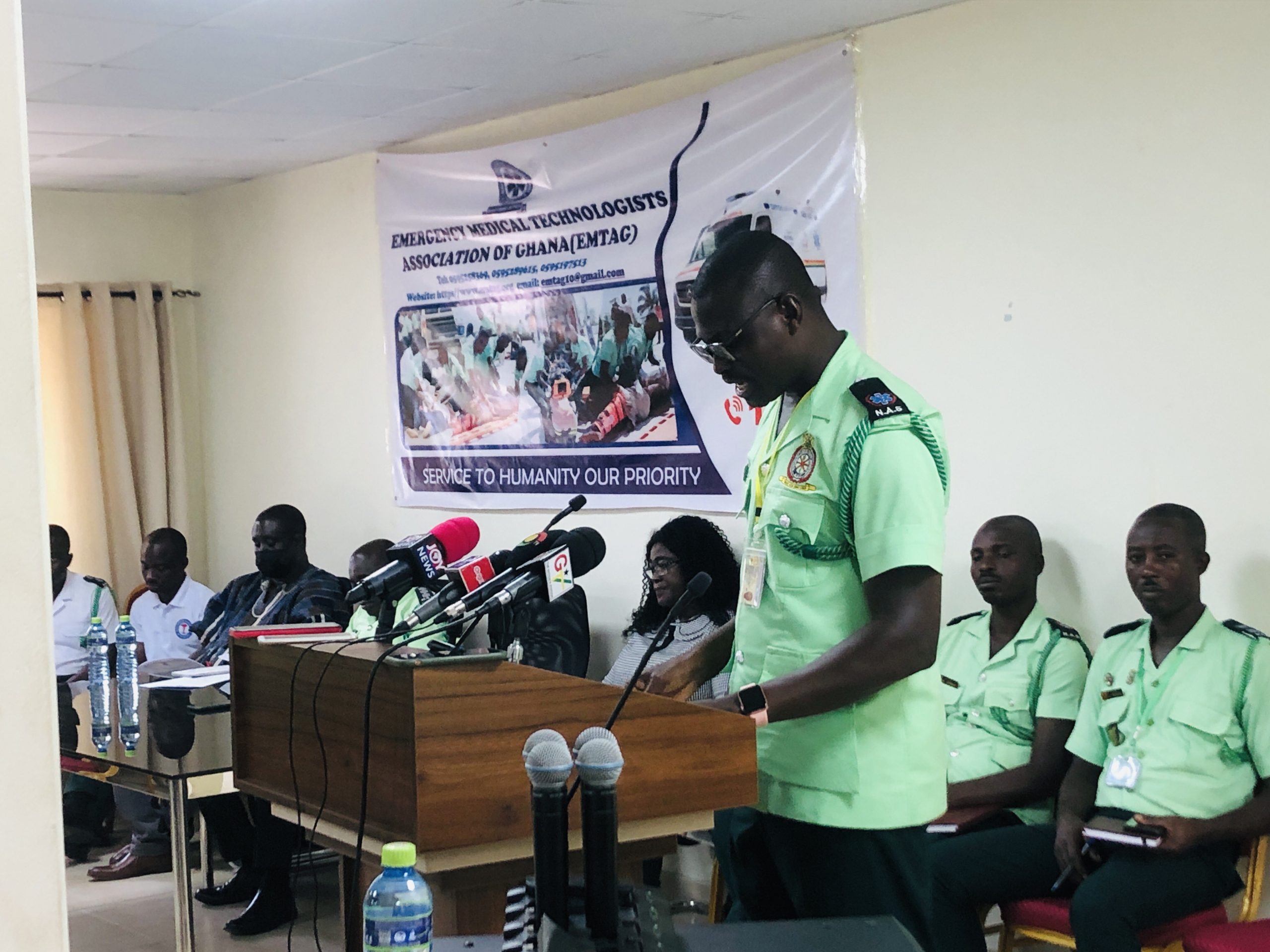 Speaking at a media briefing in Accra, President of EMTAG, Gaani Michael Dimongso said, there should be a policy initiative that will ensure a collaboration between the National Ambulance Service and the Ghana Police Service that will aim at providing
Police escort for Ambulances to help curb the armed robbery attacks. He said EMTAG is concerned about the safety of Ghanaians as armed robbers are now targeting ambulances. He expressed disgust about the cases of robbery attacking ambulances.

The leadership of the Emergency Medical Technologists Association of Ghana EMTAG, under the umbrella of the National Ambulance Service, NAS, raised issues affecting some of its members in the discharge of their operational duties. According to them, the lives of its members have been under threat emanating from the incessant attacks either by armed robbers or some section of the public, while fulfilling their mandate as Prehospital Emergency Medical Care Providers. This situation has put the members and their families in a state of fear and despair anytime they are in duty.

“We wish to state emphatically that despite all these challenges and risk faced by our members in the discharge of their duties, working in highly uncontrolled environment and susceptible to all manner of risks of acquiring diseases in the ambulance, there is no form of risk allowance for us coupled with poor working conditions.

We are aware of the efforts by Management of National Ambulance Service, the Association, and the Health Services Workers Union (HSWU) to get these matters resolved, we are appealing to collaborating key stakeholders such as the Ministry of Health and the Fair Wages and Salaries Commission to expedite action on our issues to bring respite to our members”

Gaani Michael Dimongso said, there are eleven different incident attacks till date. He said despite all these challenges and risks faced by its members in the discharge of their duties, there is no form of risk allowance for them coupled with poor working conditions. The Association is therefore appealing to the Ministry of Health and the Fair Wages and Salaries Commission to expedite action on their issues. 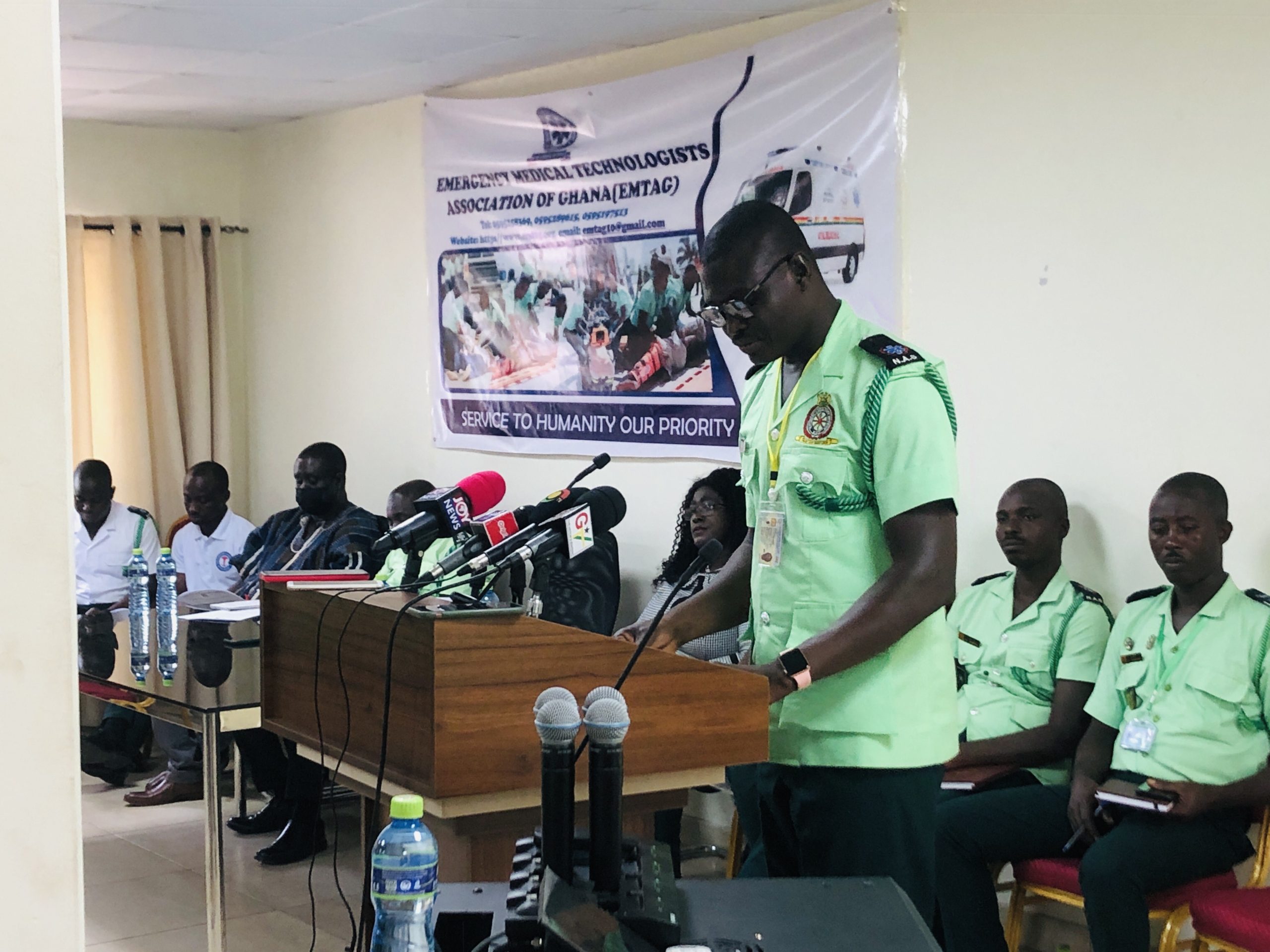 He added that, “In some of this attacks our members are subjected to shootings, beatings, mob actions, verbal and physical abuse and the most devastating one was when one of our members from the Somanya Ambulance Station was killed by armed robbers
last year January 4th.
“We have recorded a lot of public and armed robbery attacks on our members at various locations of the country which has been a great source of worry for our members. Amongst them are outlined as follows:

“We are therefore by this Press Conference calling on the government to expedite action on the following issues tabled before it by the Management of the Service, the Association and the Union: Realignment of EMTs salary with our counterparts in the health sector according to the single spine pay policy; Provide funds to the Service for the smooth implementation of the conditions of service for EMTs which was signed in last year November; The approval of the proposed risk allowance for EMTs as currently negotiated by the Union. It must be emphasized that our job is highly risky and the need for government to pay attention to our plea.”
“There should be a policy that will ensure a collaboration between the National Ambulance Service and Ghana Police Service that will aim at providing a police escort for Ambulances that is supposed to transport a patient in the night for a longer distance to help curb the armed robbery attacks”.
Deputy General Secretary of the Health Services Workers’ Union, Mrs Patricia Tweneboah appealed to stakeholders to investigate this matter and bring the perpetrators to book. 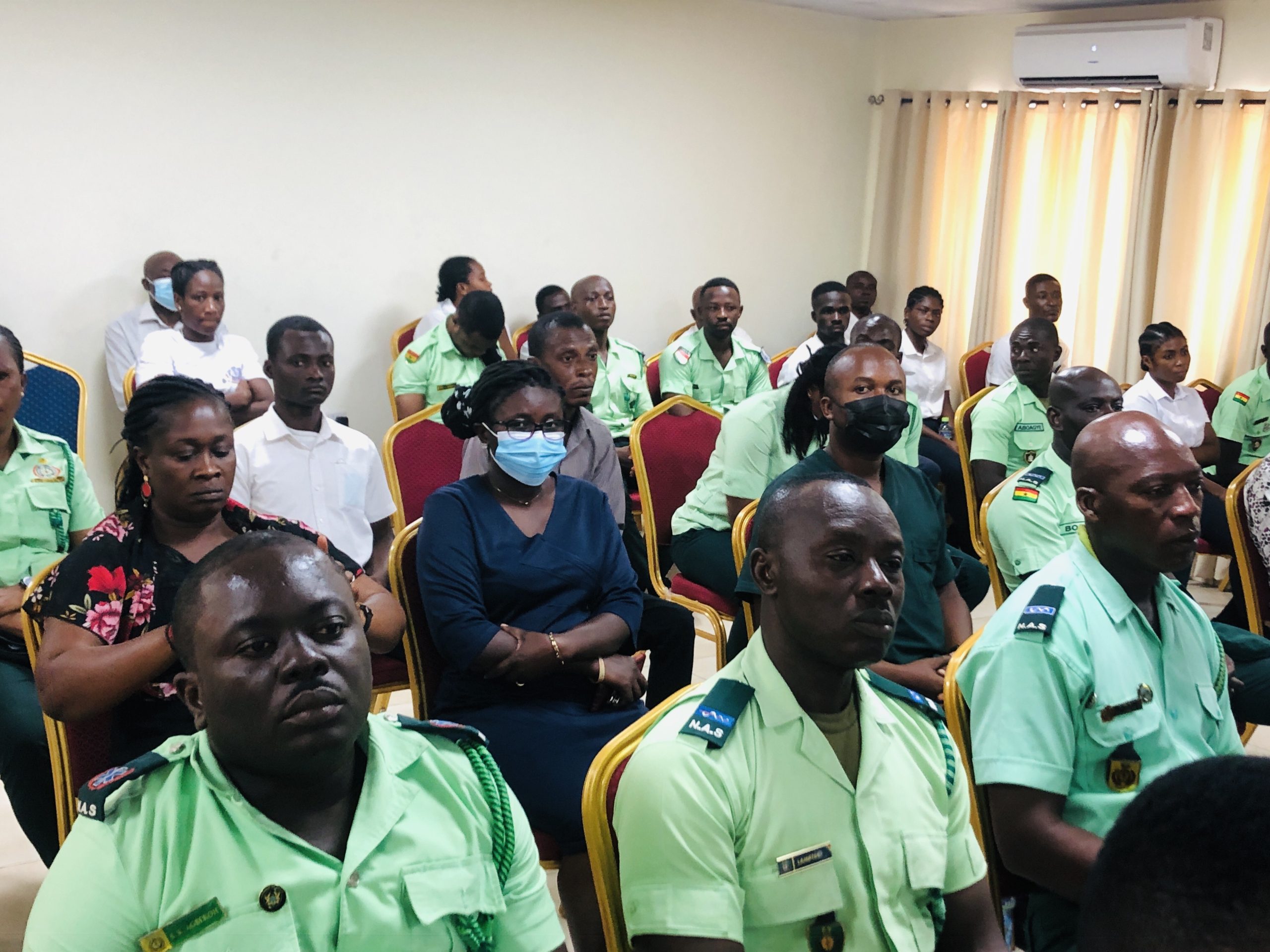 Earlier this month, an ambulance and a member of the Association carrying a victim, who suffered injuries in the renewed chieftaincy conflict in Bawku, to the hospital, were attacked by unknown gunmen.

“ Being emergency medical technologists’ specialists in the prehospital settings, we least expected these continuous attacks on our members in the past years to date since the inception of the National Ambulance Service as the Nation’s premier prehospital emergency medical service provider. But it has become important to discontinue our silence following the very recent attack on our hardworking colleagues EMTs of the Zebilla District Ambulance office crew who were transporting a patient from “Presbyterian Hospital, Bawku to Tamale Teaching Hospital (TTH) on the 11th of May 2022. The ambulance was stopped by an unknown gun man who fired several shots indiscriminately into the ambulance. When the medic driver managed and stopped, a gang of people rushed on the EMTs and when they tried to run for their lives they were overpowered and beating mercilessly. According to the EMTS, the people told them that, they will kill them (EMTS) because they are saving the victims anytime, they are shot. It took some Samaritans for their lives to be spared. Our members were immediately rushed to the Zebilla Hospital for medical examination and treatment. As Emergency medical Technologists, we are not interested in any tribal conflict, we were only called to transport a victim of road traffic crash (RTC) but when the crew arrived at the facility they realized it was a gunshot victim, we therefore want to appeal health facilities to be fair us about patients information. We are left in a state of disbelieve following the sight and scenes of the indiscriminate shootings and the bullets penetrations of both rear and front of the ambulance.

They were beating and manhandled mercilessly in their quest to save a live. The unanswered question that lingers in the minds of all Emergency Medical Technologists, is what could have been the motives of these assailants on our members? The leadership will therefore want to appeal to all well-meaning Ghanaians including the past, present and future potential attackers on our members to cease forth. There are eleven different documented incident attacks to date. In these incidents we lost one precious life and several injuries. Quite apart from the loss of life and several injuries, there have been serious damages to the ambulances which makes the State incur huge expenses to put such ambulances back on road.”