Government says it will leverage space technology systems to monitor and protect water resources to maintain its worth and quality. This comes on the back of the fight against illegal mining activities which are threatening the country’s water bodies.

Addressing the United Nation’s 5th International Conference on the Use of Space Technology for Water Resource Management in Accra, the Vice President announced that the government will soon pass the Ghana Space Policy which will further expand the role of the Ghana Space Science and Technology Institute into a full Agency to champion this course.

”Water resource management is an integral part of national development and there is an avenue for space technologies to be used to monitor and evaluate water resources.

It is estimated that three out of ten people lack access to safely managed drinking water services as water scarcity affects more than 40% of the global population and is projected to rise. Among the challenges to water security are climate change, increase in population, increase in water consumption due to domestic use, agriculture, and industry. It is against this backdrop that efforts are being made to leverage space technology to effectively monitor and protect water resources.

Vice President Bawumia said the world is changing, and at a pace that requires leaders to simultaneously move along so as not to remain laggards. He noted that while water is abundant and readily available, recent activities in the localities have begun to hinder this resource. This calls for the use of advanced technology to protect the resource. He announced that the government will soon pass the Ghana Space Policy which will further expand the role of the Ghana Space Science and Technology Institute as a full Agency in the space industry. It will also leverage this to monitor activities on the water bodies in the wake of illegal activities such as ‘galamsey’.

Vice Chancellor of the University Energy and Natural Resources, Prof. Elvis Asare-Bediako in a remark said the University awaits the passage of the Ghana Space Scientist Bill by Parliament. This, he noted, ”will speed up Ghana’s efforts to take part in the use of space technology to monitor activities on water bodies”.

Prof. Elvis Asare-Bediako, Vice-Chancellor, University of Energy and Natural Resources at the opening of the conference on Space Technology. 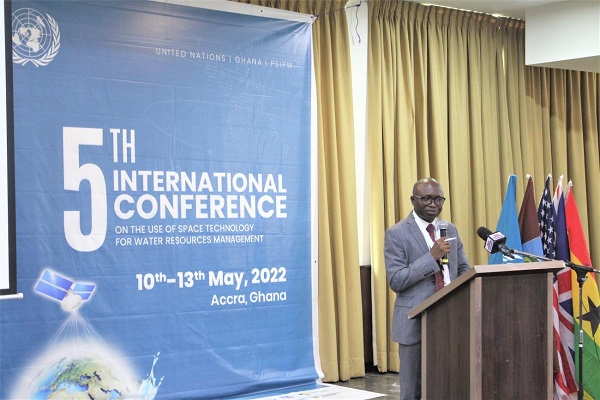 Chief Director of the Ministry of Environment, Science, Technology and Innovation, Mrs Cynthia Asare-Bediako outlined some of the initiatives to protect the country’s water bodies.

The 3-day conference will create the opportunity for participants to make recommendations towards the Decade for Action on Water for Sustainable Development 2018-2028.