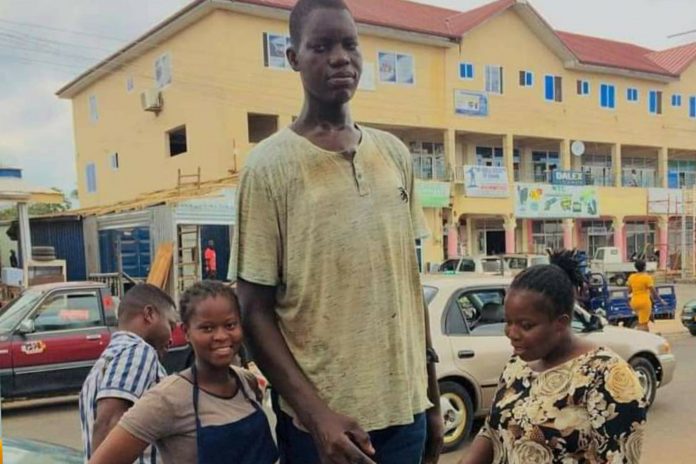 Mrs. Comfort Agbafufu, the Mother of Charles Sogli, the tallest man in the Volta Region of Ghana, looks okay, but walks with some difficulties.

She said her intermittent waist pain started after she gave birth to the giant.

The mother of five, told the Ghana News Agency (GNA) that, that pregnancy was the most challenging for her, having to endure pregnancy discomforts for 10 months.

“…His pregnancy was troubling. I suffered a lot until the time was due. I birthed him at ten months.

“During his birth, it was difficult. In those days hospitals were not common in our area so he was born at home. His head was forced out with hands and i see it as a miracle. “

The middle-aged woman and a vegetable farmer said she was bedridden for three months and nearly got paralysed after the delivery.

“He was huge, very huge. He was long. His fingers were thick and so when people came to see him they expressed amazement at my ability to deliver him at home. People were scared.

“It was not easy carrying him as a baby. We had to use two cloths to strap him at the back,” she narrated.

Mrs Agbafufu said though Charles was born with no disability and with no medical condition, he took his first steps when he was about a year and a half old.

She said, he was physically strong and ” eats alot.”

Mr Francis Agbafufu, Charles’ father, described him as a “miracle child,” with positive attitude to work and life.

He said Charles started sprouting at age three and the only one in the family of seven with the special features.

Charles is generally seen in his hometown, Ziope, a farming community in the Agotime-Ziope District, as a ‘special’ child.

At 7 feet 10 inches tall, and with a foot size of about 16 inches, Charles dropped out of school early for lack of shoes of his size, and had taken up an apprenticeship in Ho, Volta Regional capital, as a metal fabricator.

A recent spotlight thrown on his plight by the Ghana News Agency attracted TheBridgeZone, whose executives together with some people from the US, sought him out and offered some support.

Charlesoo, as he is affectionately called by his father, the young man, tries to live a normal life despite his ‘abnormal’ height and size, and move about his home in Ziope with ease.

So, his parents made no effort to alter the building design and furniture aside his bedding.

With the regular height of building ceilings at eight feet, Charles who stands at seven feet, ten inches, is barely inches away from the ceiling.

Toilet and the bathhouse have not been altered and he looks comfortable at home, as he shows no sign of weariness having to bend slightly to go through doors.

During a visit by the GNA, Charles did not permit his height to get in the way of house duties as he dashes about serving his father.

He will periodically retreat into the living room to watch television striding from the kitchen.

The GNA was told a room of normal size and dimensions had been found for him in close proximity to his place of apprenticeship in Ho.

An indication that there was not serious consideration for building dimensions based on his height and size.

The real challenge, for him, is the difficulty in boarding vehicles due to his height.

He could, therefore, be seen striding along the streets of Ho to and from his place of apprenticeship.

He will complete his apprenticeship next year and hopeful of establishing a modern metal fabrication shop.

Charles has, however, become a major attraction of the Volta Region with proposals of engagement from advertising companies and basketball teams.