By Roselyn Ganyaglo The Deputy Director General of the Ghana Education Service (GES), Dr. Kwabena Tandoh, has called for a...
Read more

By Nicholas Osei-Wusu A Kumasi-based youth entrepreneurial group, SAYETECH, has emerged as winners of the Ashanti regional edition of the...
Read more

A Clinical Psychologist, Dr. Isaac Newman Arthur, says children of celebrities may not have the built-in mechanism to cope...
Read more

Communities in Ketu South on Wednesday were affected by tidal waves from the sea that caused destruction to properties in several areas especially Salakorpe, Amutsinu, Agavedzi and Adina.

The MP, Abla Dzifa Gomashie, who was on working visit to the areas drew the government’s attention to the on-going destructions caused by sea erosion at several communities and appealed to government through the Ministry of Works and Housing to extend the sea defence project to these communities as well as Agorko, Tetekorpe, Adafienu and beyond Denu to avert perennial calamity anytime there is ‘low atmospheric pressure’ in the sea causing havoc to coastal communities under her jurisdiction. 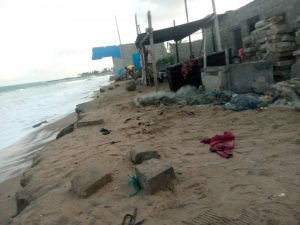 Madam Gomashie made the appeal when she visited communities affected by the sea within 24 hours of disaster which occurred on evening of Wednesday 19th May, 2021 with bags of rice and maize to the victims to alleviate the suffering.

The current catastrophe has rendered several households in Salakorpe, Amutinu, Adina, Agavedzi and other places all in the Municipality homeless and destroyed properties running into thousands of Ghana cedis. 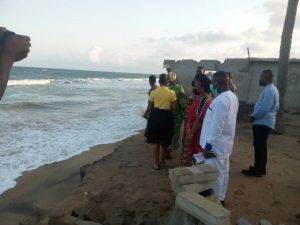 The incident which has become a common disaster along the Keta lagoon, led to the collapse of some buildings displacing close to 100 residents who lost almost all their belongings.

Residents joined the MP to call on President Akufo-Addo “to save them and their landing properties, sources of revenue” which is fishing, salt mining and farming.

Assemblyman for the Salakorpe-Amutinu Electoral Area, Sylvester Kumawu, who could not hide his disappointments predicted “looming danger” if The Assembly and the Central Government do not act now to reduce the gravity of the problem in the shortest possible time.

The sea erosion also called tidal waves do occur when bedrock in the sea moves. It may also be caused by a low atmospheric pressure known as a gravitational pull.

According to the former Ketu South Municipal coordinator of The National Disaster Management Organization (NADMO) Doe Kornyo “when this happens it allows the sea waves to increase in its sizes.  When a wind during that time moves inland the sea then moves from its usual position and it automatically floods houses that are closer to the sea”.

He said this natural phenomenon can only be “prevented when houses move far away from the sea” or create enough space between them and the sea.

The former Minister of Works and Housing, Samuel Atta Akyea, on June 24, 2020 during Meet-The-Press announced the completion of the 4.3 kilometer Blekusu Coastal protection project in the Volta Region. 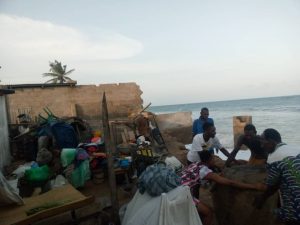 The current Municipal coordinator of The National Disaster Management Organization, Paul Alorsode in a telephone interview with our gbcghanaonline.com correspondent said, the residents have rejected all their proposals to relocate to Blekusu Mina Basic school with tents provided for them to use temporarily. He said NADMO however has been consistent with supplying them with food and non-food items anytime there is a disaster.

In 2016, the government began constructing a sea defence wall at the cost of $40million at Ablekusu enclave. The project stalled for a few months and was revived in 2017 to regain about 420,000sqm (103 acres) of land in phase 1.

The first phase of the 42-kilometre Blekusu to Adina sea defence project, which was completed in 2019, covered communities such as Havedzi-Horvi, Blekusu, and part of Agavedzi, all in the Keta and Ketu South Municipalities.

The second phase, when done, will cover the other parts of Agavedzi, Salakofe, Amutinu and Adina. Currently, these places are almost at the belly of the sea.

Since the year 2000 over 1000 houses and other landing properties have been submerged, and close to 5,000 residents who are indigenes of Blekusu, Agavedzi, Salakope and Amutinu have been displaced to adjoining communities.

By Roselyn Ganyaglo The Deputy Director General of the Ghana Education Service (GES), Dr. Kwabena Tandoh, has called for a...
Read more
General

A Clinical Psychologist, Dr. Isaac Newman Arthur, says children of celebrities may not have the built-in mechanism to cope with the public figure pressures...
Read more
General

By Murtala Issah The strike by three unions of the University for Development Studies (UDS), is yet to be called off despite the payment of...
Read more
General

By Bright Ntramah President Akufo-Addo has presented one thousand five hundred (1,500) motorbikes to the Ghana Police Service, calling on them to continue with the...
Read more

By Bright Ntramah President Akufo-Addo has presented one thousand five hundred (1,500) motorbikes to the Ghana Police Service, calling on them to continue with the...
Read more

Story by Franklin ASARE-DONKOH The Office of the Special Prosecutor (OSP) has disclosed that over seventy (70), cases are under investigation. In a report dated August 1,...
Read more

By: Serena Osei Boahemaah Ghanaian journalist and founding publisher of the “The Chronicle” newspaper, Nana Kofi Coomson has expressed how unperturbed he was about who...
Read more

‘We will do everything to beat Kotoko during Super Clash’- Hearts...