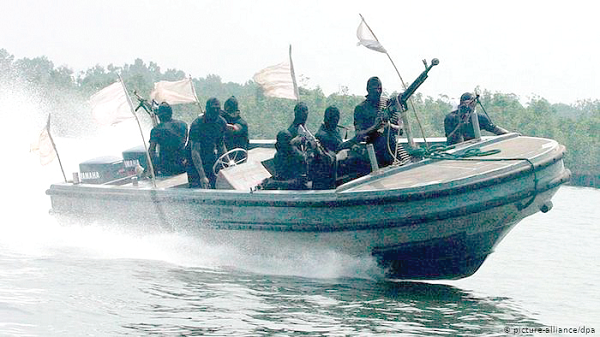 Pirates have abducted nine crew members of Ghanaian-registered fishing vessels in separate attacks off the Gulf of Guinea.

Five abductees in the first attack have been freed after an undisclosed amount was paid from a negotiated $1 million ransom demand by the kidnappers.

Those released include a Korean, a Russian and three Chinese, who were all kidnapped on the tuna fishing vessel, Atlantic Princess.

Four Koreans of a second attack are however still being held captive in Nigerian with a one million dollar ransom demand for their release. They are crews of the Iris S, another Ghanaian fishing vessel.

A team of British consultants are currently in Nigeria to negotiate for the release of the four Korean captives.

A manager of Atlantic Princess, Mr. Nicholas Papafio (not real name), told the Daily Graphic in an interview that the pirates, believed to be Nigerians, were seven in number and wielded AK47 rifles.

After shooting into the Atlantic Princess and damaging it, about eight pirates abducted the vessel’s Korean captain, three Chinese and a Russian.

“The vessel was said to have been approached and fired upon by a skiff boat, small fast boat, with eight armed pirates on board. The vessel then stopped and seven armed pirates with AK 47 boarded the vessel,” Mr. Papafio recounted.

“All mariners are cautioned that there is a high possibility of pirates mothership in the form of a rusty looking small size tanker, operating in support of pirates within the general area deep offshore Tema and stretching further East into Togo, Benin, and Nigeria,” Papafio warned.

The commercial fishing vessel, the Iris S, operating from Tema, was also reportedly attacked by armed pirates who rummaged the vessel, stealing personal possessions of the crew and equipment.

They left the fishing vessel after about an hour, taking with them four crew members. The kidnapped individuals included the captain, chief officer, second officer chief engineer, all Korean nationals, as well as another engineer who is known only as Filipino.

The remaining 31 crew members were unharmed.

A Ghana Navy patrol boat escorted the Iris S back to port. Authorities have also been informed of the kidnapping and there was hope that the pirates could be intercepted before they reached the Niger Delta where they were believed to be heading.

The Vice-President, Dr. Mahamudu Bawumia at a recent International Maritime Defence Exhibition and Conference (IMDEC) in Accra tasked agencies responsible for maritime security to collaborate to dismantle the network that sustains piracy as a business model.

He equally charged the security agencies to penetrate the levels of secrecy surrounding negotiations and payments and also the true identity of the criminal actors.

According to him without that resolve, it would be very difficult to secure the maritime domain in the quest to fully develop the blue economy.

The Vice-President cited reports indicating that 79 actual and attempted attacks were carried out last year, representing a 34 per cent increase over the 59 attacks recorded in 2019.

He added that reports along the Gulf of Guinea in recent times also signalled a surge in attacks by Pirate Action Groups (PAGs), with most incidents occurring along the coasts of Cameroon, Nigeria, Benin and Ghana.

Similarly, he said, there was a rise in the number of cases of kidnapping for ransom (KFR) and hostage-taking, and mentioned, for instance, that in 22 separate attacks recorded last year, 130 out of the 135 people kidnapped globally were reportedly abducted in the Gulf of Guinea alone.

That, Dr. Bawumia indicated, represented 95 per cent of all kidnapping cases, during which Nigeria recorded 62, Benin 29 and Ghana six.

The situation, he said, had become even more precarious, considering that over the past two months, about 10 crew members of two Ghanaian-flagged fishing vessels had been abducted in separate incidents along the Gulf of Guinea.

While expressing the commitment of the government to tackle the insecurity in the maritime sector, Vice-President Bawumia said the first half of the year had witnessed greater piracy threats and activities, with over 30 recorded incidents.

More disturbing was a report from the Centre of Maritime Law and Security Africa (CEMLAWS) that KFR had developed into an ‘improved business module’ which attracted criminal groups to shift from theft and robberies.

The Chief of Naval Staff, Rear Admiral Issah Yakubu, at the same event said “our maritime column had been touted as one of the most dangerous waters in the whole world and this has dire consequences on trade.”

He said the region’s blue economy (the economics of exploitation, preservation and regeneration of the marine environment) had suffered significantly from disruptions in international trade, fishing and other challenges due to the insecurity in the maritime domain.

However, Rear Admiral Yakubu said in spite of the threats posed by the COVID-19 pandemic, the Ghana Navy and allied services could not afford to slow down their operations because the criminals had increased the tempo of their operations.

He was hopeful that as experts in the industry, they would cooperate effectively to determine the best way forward to tackle the maritime threats.

Nigeria has been under pressure from the shipping industry to curb piracy in the Gulf of Guinea. It accounts for more than 80 per cent of maritime kidnappings globally, the International Maritime Bureau says.

Africa’s most dangerous waters used to be off Somalia but, after the deployment of international warships, the situation there has improved and moved gradually towards the Gulf of Guinea.

In May last year, the UK and French navies warned of the rising threat of piracy in the area near Ghana and Benin in the Gulf of Guinea.

The International Chamber of Commerce International Maritime Bureau (ICC-IMB) reported that the Gulf of Guinea has experienced a significant rise in crew kidnappings since 2019 and accounts for about 95 per cent of crew members kidnapped in 2020.