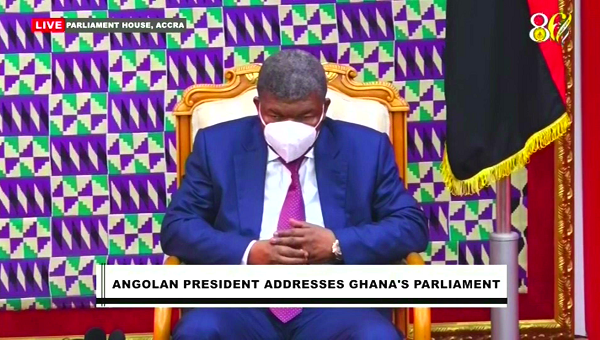 President João Manuel Lourenço of Angola addressed Parliament in Accra and called for closer cooperation between the two countries for mutual benefit.

He said both Accra and Luanda had shared values in terms of their democratic transition, which started in 1992 after many years of armed conflicts.
President Lourenço’s address to the Legislature on Tuesday was part of the itinerary of his three-day state visit to Ghana.
The hosting of the Angolan President by Ghana’s Parliament is a reciprocal and fraternal gesture to a similar event by President Nana Addo Dankwa Akufo-Addo when he paid a state visit to Angola in 2019.
President Lourenço was accompanied to the House by a delegation of Ministers of State, Members of Parliament (MPs), and other top government officials from Angola.
Since becoming President in September 2017, the Angolan leader had been hailed by many for his strong stand against corruption and his help to retrieve billions of dollars of national wealth stashed outside the country by former government officials.
The Speaker of Parliament, Mr Alban Bagbin, lauded President Manuel Lourenço for his commitment and dedication to tackling corruption head-on in his country and reducing economic graft.
Speaker Bagbin said President Lourenço’s devotion to tackling graft underscored the importance of building stronger institutions for good governance.
He called on all institutions in the world to wake up and discharge their mandate for both the current and future generations and commended the Angolan President for his resilience at national reconstruction.
The Speaker observed that the worthy effort at streamlining and simplifying administrative systems, practices and procedures of the public sector was a means towards achieving the larger anti-corruption goal.
He said the huge savings of over US$5 billion that President Lourencio’s Administration had made a little over two years ago for his country by retrieving ill-gotten worth of corrupt individuals was remarkable.
“This has really proved that tackling corruption is about vigorously pursuing and sealing economic loopholes in the administration of the nation’s resources and such outcomes present yet a major source of finance for the running of every economy,” Speaker Bagbin said.
The Majority Leader, Mr Osei Kyei-Mensah-Bonsu, said Ghana and Angola enjoyed long-standing economic and cultural relations, which had contributed to the strengthening of the political goodwill between the two countries.
He said Ghana was among the first countries to accord recognition to the Republic of Angola in December 1975 after the country attained independence from Portugal.
Mr Kyei-Mensah-Bonsu said subsequently in 1976 Ghana established diplomatic mission in Luanda and appointed the first Ambassador to that country.Following the end of the civil war in 2002 and the return to peace and stability, Angola in 2005 also established a diplomatic mission in Accra.
He said over the years bi-lateral relations between the two countries had been characterized by the exchange of visit by a number of senior government officials.
He said the current bi-lateral relations presented the opportunity to further strengthen the economic ties between the two countries and explore other possible areas of cooperation for their mutual benefit.
The Minority Leader, Mr Haruna Iddrisu, praised President Lourenço for his dedication to fighting corruption in Angola, which served as a deterrent to those who desired to exploit public office for their personal gain.
He said Ghana would continue to follow her foreign policy devoid of partisanship.
President Lourenco, early on Monday, August 2, was at the Jubilee House to hold bilateral discussions with President Akufo-Addo on deepening cooperation and the bonds of friendship.
He held a meeting with local businesses to promote investment.
President Lourenço, who returns to Luanda on Wednesday, is on a tour that had already taken him to Turkey and Guinea.