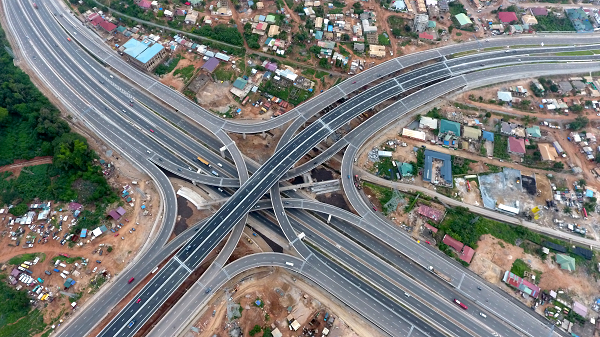 The Pokuase Interchange was officially opened for vehicular traffic on the 9th of July, 2021.

The 4-tier interchange is intended to ease the heavy traffic that usually characterizes that stretch of road. 3-months after the opening, how has the interchange achieved the purpose for which it was constructed? GBC News looked for the answer in this report by Gloria Agbemasi Davordzie.

3-months after the official opening of the Pokuase Interchange by the President, Nana Addo Dankwa Akufo Addo, there seems to be not much improvement in the flow of vehicular traffic within the corridors. The situation has become a cause of worry for commuters, pedestrians and other users of the road. Some passengers GBC News spoke to think that the construction of the interchange is good but the initial challenges of heavy traffic congestion persists. They said the distance from ACP to Ofankor Barrier which could take about 10 minutes rather takes about an hour. They called for the construction to continue but suggested that the stretch from Pokuase to Medie and from Pokuase to Ofankor Barrier should be expanded.

“The road construction is very good, but we are facing a lot of challenges. The passengers, pedestrians and other road users. So we are advising the engineers and those in authority to complete the construction of the road, especially from Amasaman, through to Barrier, so that we can have a smooth movement of all passengers. From ACP to Barrier alone, we are supposed to spend about 10 minutes, but we can spend about 1 hour, 30 minutes, sometimes 45 minutes, which is very unreasonable. So we are appealing to those in authority to award the road construction to contractors, so they will complete it for us, because we are suffering.” ”It’s eating into human time, fuel and it’s raising the standard of living for us’’, a commuter stated.

Another said, “After the road, fine. From using, let’s say from Barrier to Nsawam, that is when you are going to Nsawam is not bad, but then, when you are coming from Nsawam to Accra, especially from ACP going to Accra, I will suggest that they will do the main road so that it can join up to the main road and then when people are coming, then they will have a car, that those cars will be using the main road and we will have the other one that will be using the sideways. So in actual sense, the traffic will just be bumping up in the ACP and then the pedestrian and then the passengers are stopping all the time. So they will really have to do this. If not, we will say that there is no use of doing the road, because we still suffer the same thing that we were suffering when we were trying to do the road, so that we will be able to release ourselves from trouble. I think they will have to reconsider the whole thing again and do the main road into Pokuase”.

This road user also had similar concerns about the Pokuase Interchange.

GBC News can confirm that the traffic holdup starts from Kpobiman through to Amasaman, Pokuase to Ofankor Barrier during the peak hours in the morning and sometimes towards evenings from Taifa junction to Amasaman.