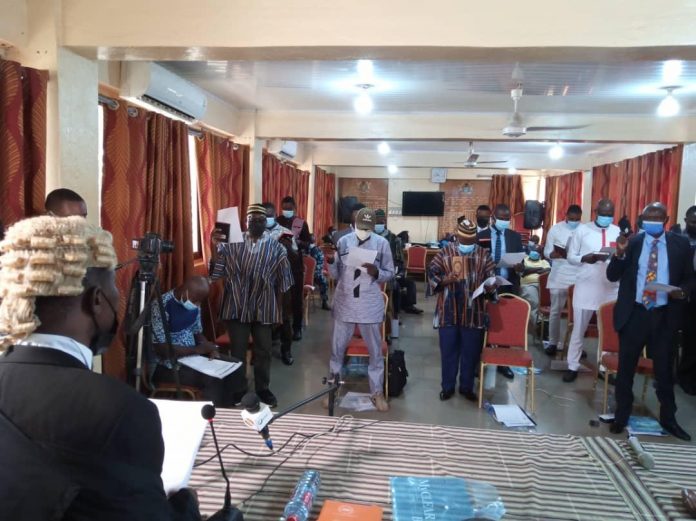 An 18-Member Board of the Upper West Regional Lands Commission has been inaugurated in Wa in accordance with Article 260 of the 1992 Constitution of the Republic of Ghana and the Lands Commission Act, 2008 (Act 767).

The board is to steer affairs for the next four years.
Fifteen members of the Commission led by the Chairman, Alhaji Mohammed Abdul-Haq, were present and were sworn into office by Justice Abdul-Yussif Assibey, the Supervising High Court Judge in the Region with three absent.

Mr George Mireku Duker, the Deputy Minister of Lands and Natural Resources who performed the inaugural ceremony on behalf of the Minister, Mr Samuel Abu Jinapor, congratulated members and urged them to bring onboard their skills and expertise to deliver well on their mandate.

He noted that the role of land in the economy of the nation was of great significance and that without sound tenure security and appropriate land management principles, there could be no sustainable development as they would be little or no willingness by local and foreign investors to make long term investments.

The Deputy Minister indicated that one of the cardinal functions of the Commission was to provide advisory services not only to government agencies but also to Traditional Authorities as well in the management of Land.

Mr Duker noted that one of the major challenges of land administration and management in the region was the fragmented nature of land ownership and holdings.
He pointed out that investors needed to negotiate with some landowners when a sizeable parcel of land was to be acquired, noting that this at times could be frustrating as some may not be willing to dispose of their interest within the said area.

He said this was not conducive for large-scale investment, adding that the Commission would be expected to play a strategic role to ensure that the interests of both the landowners and investors were adequately catered for.

Mr Duker noted that the de-vesting of lands in the Northern Regions had resulted in landowners threatening to sell undeveloped lands within areas already developed by the state without due process, urging the Commission to critically examine the phenomena and come up with a better approach to deal with it.

He listed boundary disputes between allodial owners/communities; multiple land sales; illegal felling of rosewoods; illegal mining activities; and encroachment on state lands, road reservation, open spaces, water bodies, and the sitting of temporal structures popularly known as containers along the principal roads within the Wa Municipality as some of the other challenges faced by the region.

The Deputy Minister advised that in dealing with these issues, members of the Commission should be fully guided by the provisions of the Lands Commission Act, 2008 (Act 767) and the Land Act, 2020 (Act 1036) and always ensure that there was equity in the functional responsibilities and privileges of all divisions of the Commission and allied land management agencies as well as the Customary Authorities.

Dr Hafiz Bin Salih, the Upper West Regional Minister, said it was a known fact that Government Lands and Natural Resources were seriously under threat of encroachment by developers coupled with the unsustainable exploitation of the natural resources by the present generation.

He said this attitude ought to be checked so that Government lands would be used for the purpose for which they were acquired and urged the newly inaugurated Commission to make that their utmost responsibility.

Alhaji Sulemana Mahama, the Executive Secretary of the Lands Commission, noted that land issues were very emotive and urged the Committee members who were carefully selected from relevant institutions across the districts to let their responsibilities reflect the land issues in their areas.

Alhaji Mahama noted that the Lands Commission itself was not adequately resourced to carry out its numerous responsibilities and therefore cautioned members of the Commission to manage their expectations and focus on their responsibilities.