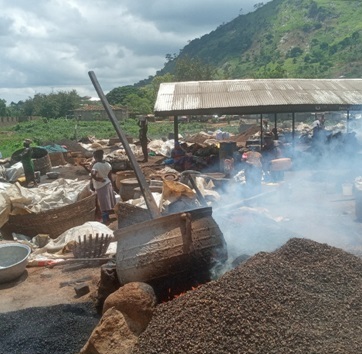 More than 70 women operate daily in the open under the mercy of the weather, using traditional methods, and have to suspend production whenever it rained.

The women use open fire, fuelled by lorry tyres and plastic materials, to boil the palm kernel for extraction of oil as part of the procedure and in the process inhale the smoke.

These women, working in groups, had been in the business for the past 15 years, which is their source of livelihoods, to cater for their families.

The production site, located on the main Koforidua-Somanya road, showed it lacked water facilities which is the main input in the production chain and toilet facilities, raising sanitation concerns.

Averagely, the groups together produce about 50 gallons (five-litre per gallon) of oil for the market on weekly basis, providing income for about 20 people in the process.

Madam Afua Mamprusi, the group leader, said that they worked in about five groups and each group took turns weekly as a marketing strategy to ensure the even spread of profit and market share. The producers source their raw material; the palm kernel, from villages and communities.

Madam Afua said the lack of water and toilet facilities made their work difficult, but they had no alternative. She said the heat and smoke from the boiling process had affected their health as most women often complained of dizziness, chest pains, cough and general weakness.

She said when given the needed facilities and assistance, the centre could accommodate more women and increase production.

She, therefore, appealed to the Municipal Assembly to provide them with the necessary facilities to improve their business.

Another worker, Madam Gifty Daglo, said the site belonged to a private person who had often threatened to eject them.

She appealed for support to have a permanent working place and modern technology to expand their production lines.

She said palm kernel oil had health benefits and as more people were moving away from the consumption of vegetable oil, the women needed support in the form of modern equipment and facilities to meet growing market demands.