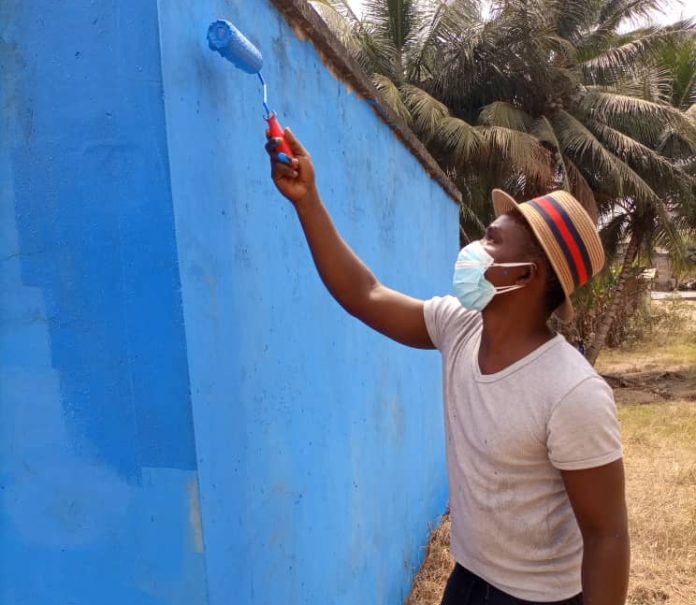 The Head teacher of Kwasi Nyarko Presbyterian Primary School in the Upper West Akim District of the Eastern Region, Richard Boakye Marfo, has used his monthly salary to paint his school building.

In an exclusive interview with our reporter Michael Kenetey, Mr. Marfo revealed that the school competes with Preparatory Schools in the Community and in order to increase enrolment in his school, the building has to look attractive to the Pupils, which motivated him to undertake such an initiative.

Mr. Marfo noted that since he assumed the office as the Head teacher in 2019, this is the second time he is using his own funds to paint the school.

The Head Teacher further noted that the Ghana Education Service, GES is not aware of his initiative, however, he disclosed that the School Management Committee, SMC and the Parent-Teacher Association, PTA are aware of the situation. Mr. Marfo hinted that some Community members have been using the school premises for all sorts of nefarious activities such as defecation, smoking in the classroom and school compound as well a place for sexual activities because the School have no gate and in order to put a stop to such activities, he used his monthly earnings to fix a metal gate.

Mr. Marfo said the fixing of the gate and painting of the School twice cost him about GHC14,000. He added that was his contribution to making Ghana a better place for posterity.

He appealed to the government, philanthropists and benevolent organizations to come to their aid and provide them with desks and a computer lab for the Pupils to enhance effective teaching and learning.