GHS to deworm all school going-age children against NTDs

Some residents of Sekondi-Takoradi today joined a “Fix The Country” demonstration in the metropolis to drum home the need...
Read more

Sudan's Prime Minister Abdalla Hamdok has described a failed coup as an attempt to derail the country's transition to...
Read more

By Rebecca Ekpe. "We want to make Nzulenzu, Ghana’s Venice.’’ These are the words of Frank Ezo Blay, Manager of...
Read more

All school going-age children in the country would be dewormed once a year to protect them from contracting Lymphatic Filariasis and Onchocerciasis, Dr Kofi Asemanyi-Mensah, the National Programme Manager of the Neglected Tropical Diseases (NTDs) has announced.

Lymphatic Filiariasis (elephantiasis) and Onchocerciasis (river blindness) are among the five NTDs endemic in the country.

Dr Asemanyi-Mensah said this at the opening session of the national launch of the Mass Drug Administration (MDAs) against Onchocerciaisis on Monday in Sunyani.

The Mass Drug Administration is scheduled for August 9 to 22, this year.

On the theme “Face NTDs, End the Neglect through Effective and Quality MDAs”, the launch was attended by public health directors across the country, as well as other governmental agencies including Ghana Education Service and the Information Services Department. 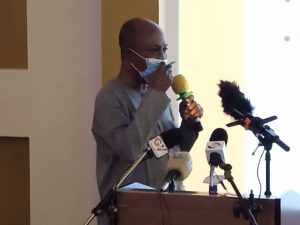 Dr Asemanyi-Mensah explained though Oncho was endemic in 11 hotspot districts, yet the campaign was targeted at 137 districts in 15 regions, and expressed appreciation to the World Health Organisation (WHO) and other development partners for their support in helping to manage NTDs in the country.

He said the Ghana Health Service (GHS) would intensify surveillance and monitoring in the Oncho endemic prone communities and stressed commitment to eliminate the disease by 2025.

Dr Asemanyi-Mensah called on the Regional Health Directorates to re-launch and intensify public education on the MDAs at the regional levels to achieve the desirable outcomes.

Some residents of Sekondi-Takoradi today joined a “Fix The Country” demonstration in the metropolis to drum home the need...
Read more
Africa

Sudan's Prime Minister Abdalla Hamdok has described a failed coup as an attempt to derail the country's transition to civilian rule. In a televised address,...
Read more
Entertainment

By Rebecca Ekpe. "We want to make Nzulenzu, Ghana’s Venice.’’ These are the words of Frank Ezo Blay, Manager of the Nzulenzu Stilt Tourism Project...
Read more
General

Unemployment has been one of the worrying trends that often confront successive governments. Over the years, there have been efforts to surmount this menace,...
Read more
General

By: Murtala Issah  Some public sector workers in the Northern region took to the streets today September 21, 2021 to mount pressure on the leadership...
Read more

By Nicholas Osei Wusu. As part of the government's efforts to vaccinate a sizable proportion of the adults population in Ghana, Management of the KNUST...
Read more

By Emmanuel Akayeti. The 2nd Phase of the Seasonal Malaria Chemoprevention (SMC) exercise for children under 3 years has ended successfully in the Upper East...
Read more

Floods kill more than 60 in Sudan