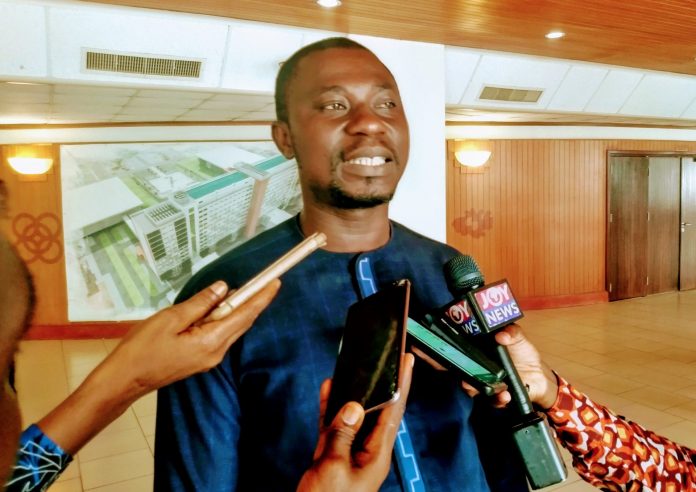 The Member of Parliament for Ashaiman Constituency has questioned the Roads and Highways Minister on the deteriorating nature of the roads in the area.

The MP, Ernest Henry Norgbey, who referred to his constituency as the United State of Ghana since “all tribes and religions could be found there”, wanted to know from the Minister when about seven roads in his constituency will be constructed.

In response to the question, Minister Amoako Attah said, “Presby Junction — Police Junction Road being undertaken under the project titled ‘Construction of Road and Paving at Jericho and Pink Lady under the Coastal Development Authority (CODA)’ is at 57.5 percent physical completion.

But he noted that the Contractor is currently inactive on-site due to financial constraints.

On Afari-New Town Road under the project titled ‘Rehabilitation of Tema International School Road & Afariwa Link—Ashaiman’ at about 1.37km. The Contract for the above project was awarded on April 29, 2019. All measures taken to get the contractor to commence the works have proven futile,” the Minister said on the floor of Parliament on Tuesday, July 13.

“When it comes to New Tulaku — Official Town Road & ‘Lebanon Roads’ titled “Rehabilitation of Annan, Ampere & Agbesi Close Roads (1.5km), the contract was about 92 percent complete. However, the revised contract is at 18 percent physical completion due to the inclusion of the additional works totaling 7.05km.”

“The contractor is currently not on site due to delayed payment for work done. The project commenced on December 6, 2016, and was scheduled for completion on December 5, 2017.”

According to the Minister, “Two Variation Orders were raised on the project to ensure comprehensive coverage and the development of the community.”

“Work done to date are 2,191.50m long 600mm-diameter concrete u-drains and 2.08km of road works (subbase, base, primer-seal and sealing works”, meanwhile, there is no current program for Fitter Line Roads.

“The Night Market Road was undertaken under the project titled ‘Rehabilitation of Night Market Road and Links, The Coastal Development Authority (CODA), The Contractor is yet to mobilise to the site to commence the works.”

“There is no current program for Old Tulaku Roads.”

“Progress of works is at 11% physical completion and the Contractor is on-site and works done to date 5.2km of base works & primer-sealing of new roads, and resealing of previously sealed roads.”

On the Construction of Road and Paving at Jericho and Pink Lady, he said, the Department will liaise with the Clients, the Coastal Development Authority to get the Contractor to re-mobilise to the site to complete outstanding works.

The Minister said other roads like Fitter Line, Old Tulaku, Night Market, and co will be given to the assembly to conduct an inventory on them and consider a budget for the same for future development.

But unsatisfied with the response, Ernest Henry Norgbey, MP, on Tuesday, July 13, accused the government of abandoning Ashaiman roads and promised to mobilise his people to “plant bananas and plantains on these roads since the current government has chosen to allow them to go bad”.