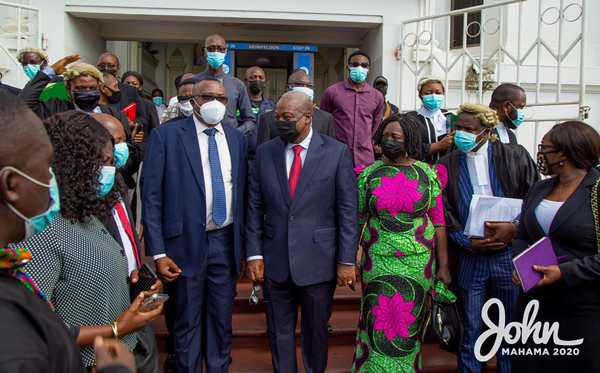 The Supreme Court has dismissed a review application filed by the Petitioner in the on-going election petition urging the court to reconsider its earlier decision that the Chairperson of the Electoral Commission cannot be compelled to testify.

The court held that Counsel for the Petitioner failed to demonstrate how the ruling occasioned a miscarriage of justice.

At the Court’s sitting on Thursday, February 18, the Petitioner’s Application for Stay of Proceedings was also struck out, with the panel describing it as moot.

Meanwhile, the Petitioner has filed another application urging the court to review its decision not to allow him reopen his case and subpoena the Chairperson of the EC.

In its ruling, the court said the Petitioner failed to satisfy that an important matter resulted from his reliance on provisions in Article 19 clause 13 and 296 of the Constitution. It was the case of the petitioner that the court fundamentally erred in its ruling and has caused a grave miscarriage of Justice.

Counsel for the petitioner, Tsatsu Tsikata, said with the Operations of order 33, the ruling of the court was in breach of Article 19(14) which stipulates a denial of fair hearing. It was the submissions of the Petitioner that the conduct of the EC chairperson is a flaw since attempt by some unsigned press releases was an error.

Counsel for the first respondent, Justin Amenuvor, opposed the application for review relying on Rule 54 of CI 16. He submitted that there have not been any fundamental errors of law which have occasioned a miscarriage of justice or constitute exceptional circumstance to warrant a review of the Court’s decision.

He said Petitioner’s reliance on Section 26 of the Evidence Act is misconceived. It was the case of Mr. Amenuvor that Mr. Tsikata failed to advance any new grounds in his analysis of the ruling to urge the Court to review its earlier decision.

According to him, Mr. Tsikata made the same arguments and cited the same authorities as he did in his argument before the court to reopen the Petitioner’s case.

Lawyer for the second respondent, Akoto Ampaw, also opposed the application and prayed the court to dismiss it. He submitted that it did not appropriately revoke the special review jurisdiction of the court. He said the application is a classic case of an aggrieved party who has become emotional by the decision of the court and seeking to re argue his case through the back door of an apparently review application which is not.

He said in Mr. Tsikata’s reference to Section 26 of the Evidence Act, he failed to recognise that it is subject to any other law or rules of equity. He said the Petitioner cannot seek refuge in the fact that the application was not argued on Order 38 because there were extensive arguments by both sides.

Mr. Ampaw said Mr. Tsikata had every opportunity to advance his arguments and could therefore not say he was taken by surprise. He urged the court to ignore the arguments by Mr. Tsikata in respect of the correct or otherwise of the use of Order 38.

Mr. Ampaw submitted further that the application is without merit and did not satisfy the condition for review as set out by law. He prayed that the application be dismissed on grounds of abuse of court process. The Supreme Court has adjourned to Monday to hear the other Application for Review.