By Ivan Amponsah. South Africa’s President Cyril Ramaphosa has arrived in Accra on a three-day state visit. The visit is to...
Read more

Fifa has dismissed the protest by South Africa that called for the replay for the 2022 World Cup qualifier...
Read more

By Rebecca Ekpe. Government has the onerous task of protecting the Private Sector, as it remains the largest employer in...
Read more

One hundred and eighty nine (189) hotspots have been identified by the Tema Police Regional Command for the upcoming December 7, 2020, general elections.

Apart from Shai-Osuduku constituency which had no hotspot, all other constituencies namely Tema East, Ada West (Sege), Kpone-Katamanso, Ningo-Prampram, Tema Central and Ashaiman have some potential violence areas.

This was disclosed to the media on Friday during a day’s workshop on crime reporting for journalists in the Region.

Superintendent of Police Seth Tay, Kpone District Commander, speaking on the topic, “Special police operations and hotspots for election 2020” explained that the 189 hotspots were selected based on the tendency for violence to easily erupt in those areas, and their nature.

Supt. Tay added that such areas had also witnessed frequent violent activities in the past and had a history of crimes, land guards, and chieftaincy issues, among others.

He said the Police is well prepared to provide the needed security in the Region to ensure the sanctity of the Elections, adding that all these would be done taking into account the protocols governing the COVID-19 pandemic.

DCOP Sasraku said they will create a cordial relationship between the Police and the media  to trust each other in the discharge of their respective roles for the good of the region and the country as a whole.

He urged media practitioners to be circumspect in their choice of words saying “people take whatever the media say as the truth. So, what you write, and say whether true or not, impact on society”.

DSP Boye said journalists must keep their distance at crime scenes when reporting as they might leave some traces that could be used by investigators to link them to the crime even though they may not be the perpetrators.

He therefore advised the media to report immediately to the nearest police station any crime they witnessed and rely on information from the police instead of snooping around at the crime scene, adding that “bear with the police on the information they give you even if it’s sketchy”.

Tema Metropolitan Director, Electoral Commission Manasseh Ofosuhene Asante, speaking on the voting procedure for Election 2020, revealed that the Metro now had 382 polling stations for this year’s elections compared to the 268 for 2016.

Mr Asante explained that Tema East’s polling stations is now 237 from 159 while that of Tema Central has moved from 109 to 145, noting that the EC used a threshold of 730 to divide existing polling centres which recorded high numbers during the registration to ensure fast voting.

He disclosed that 313 registered voters mostly made up of students transferred their votes from various districts to Tema Metro during the transfer exercise, and gave the assurance that the EC had also successfully rectified the name missing challenges observed during the exhibition exercise.

He said Election 2020 was being organized under CI 127 and announced that the EC had recruited and trained COVID-19 ambassadors for each polling centres to ensure that laid down protocols were followed to the later on Election Day, adding that each centre would now have six electoral officers due to the inclusion of the ambassadors.

The polling centre for the special voting for Tema East and Tema Central would respectively be Tema Community One Police Barracks, and Community Eight Police Station.

The designated collation centres for the 2020 elections for Tema East would be the Our Lady of Mercy Senior High School (OLAMS) while that of Tema Central would be Chemu SHS.

The journalists also received training in police mandate structure and ranks, policies of the Police Service on media and public engagements, patriotism and media work, as well as ethics of journalism. 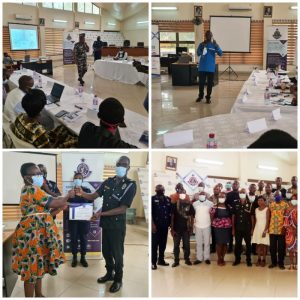 By Ivan Amponsah. South Africa’s President Cyril Ramaphosa has arrived in Accra on a three-day state visit. The visit is to...
Read more
Sport

Fifa has dismissed the protest by South Africa that called for the replay for the 2022 World Cup qualifier against Ghana that the Bafana...
Read more
General

By Rebecca Ekpe. Government has the onerous task of protecting the Private Sector, as it remains the largest employer in Ghana. In the meantime, the...
Read more
General

Alhaji Mashood Mohammed from Mion District in the Northern Region has been adjudged the 2021 National Best Farmer at the 37th National farmers Day...
Read more
Education

By Nicholas Osei-Wusu. Girl-Child Education Campaign in Ghana has been boosted following the graduation of the youngest ever student of the Kwame Nkrumah University of...
Read more

The NDC Caucus in Parliament has assured Ghanaians that it will continue to use every legitimate and lawful channel to resist the 1.75% E-Levy...
Read more

By Murtala Issah. Running Mate for the NDC in the 2020 elections, Professor Jane Naana Opoku-Agyemang has called for the creation of a fair society...
Read more