Works have begun on the construction of a damaged wall around the exposed power transmission pylon at Buokrom Estate in Kumasi in the Ashanti region.

Even though Managers of the Electricity Company and Volta River Authority insist that the contract for the project was awarded late last year, some residents of Buokrom Estate believe it is a swift response to a recent video with commentary highlighting the dangers posed by the situation that was circulating on social media.

Correspondent Nicholas Osei-Wusu reports that for some weeks now, a video with commentary in the Twi dialect had been circulating on various social media platforms drawing attention to the perceived danger posed by a power transmission pylon or high tension located near a transformer at the outskirts of the Airport Estates commonly called Buokrom Estate in the Manhyia North Sub-Metro of the Kumasi Metropolis. 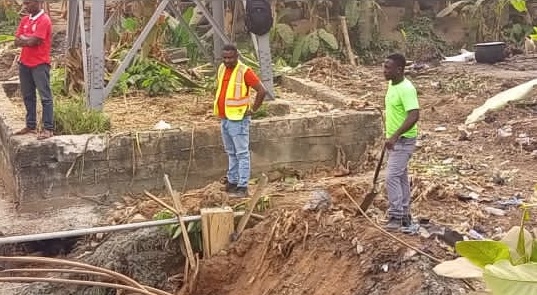 It was clear from the video that the concrete base of the high tension pylon had been fast eroding over time ostensibly from flood waters and water from a nearby stream.

GBCNews caught up with the originator of the viral video, Isaac Fosuhene, who explained that he did the video with other concerned residents of the locality to draw duty bearers’ attention to the threat posed by the situation.

Following the viral video, the Electricity Company of Ghana, ECG, issued a press statement admitting the situation but refuted the impression created by the commentator that the state of the high tension pylon posed imminent danger to people living around it.

The statement nonetheless assured that steps would be taken to correct the problem.

When GBC News visited the location of the said high tension pylon, a contractor had mobilized at the site and that construction works were ongoing.

The contractor, Emmanuel Wiafe told the News team that the project was supposed to have been undertaken in September 2021, but intensity of the rains forced a reschedule to the dry season and that began the construction on Friday January 28, 2022. He explained what the project entailed that it will be carried out within a month.

Mr. Wiafe gave the assurance that during the period of the project, power supply to the beneficiary communities will continue unaffected. Assembly Member for the Buokrom Estate Electoral Area, Kwame Agyemang, commended the ECG, VRA and the MP for Manhyia North, Akwasi Konadu, for giving the problem urgent attention.

The Assemblyman was also happy that the stakeholders have used a resolution for the exposed high tension pylon to dredge the heavily silted stream that flooded the main road at the least rainfall. This has also helped to clear the bush in the area, which has become a den for criminals who have been attacking passers-by in the night.

The originator of the viral video, Isaac Fosuhene expressed joy that his social media initiative had achieved a timely result to save the people from imminent danger.