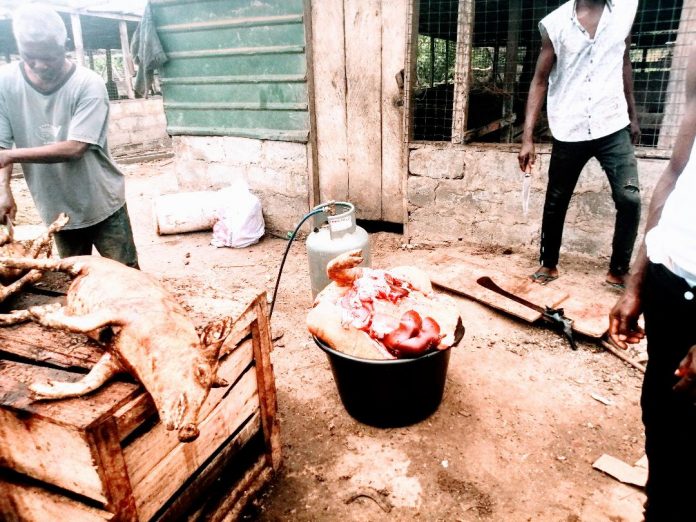 The devastating impact of the African swine fever through pig farms within the Saki community in the Kpone-Katamanso Municipality of the Greater Accra Region has forced most farmers to desert their pigs in the farms.

This came to light when Tema office on Wednesday visited some of the piggeries to ascertain impact of the African swine fever which had so far killed over 600 pigs within the Saki Community.

They observed that most of the farmers were not on site whereas others were spotted slaughtering the live ones whist their customers were on standby to buy the pork for their daily business in the various communities.

A farmer said that he had no option than to slaughter and sell the remaining pigs to compensate for the loss adding that all his investment had been destroyed by the African swine fever.

He appealed to the government to cushion the farmers since they contributed to the nation’s development.

In a telephone interview, Dr. Emmanuel Kwao Pecku, Kpone-Katamanso Veterinary Officer advised that there should not be any movement of pigs or meat (pork) to different places as it had the tendencies of causing a surge in the spread of the African Fever.

He said the situation could be controlled when the farmers cooperate with the veterinary officers adding that the farmers failed to inform the Agric Extension Officers about the outbreak when it started.

‘If they had informed us the situation would have been controlled,’ he said.

Meanwhile, the Kpone-Katamanso Municipal Veterinary Office in collaboration with the Municipal Assembly has temporarily banned the consumption of all pork and its related transactions due to the outbreak of African swine fever in pig farms in the Municipality.

Hundreds of pigs have been killed within the Kpone-Katamanso Municipality due to the outbreak, Dr Pecku, said that the disease was spreading fast amongst the pigs.

“All dead pigs should be buried and the entire place disinfected to stop the spread,” Dr Pecku said at Kpone during a facility visit embarked on by Mr Solomon Tettey Appiah, Kpone-Katamanso Municipal Chief Executive to evaluate the problem.

The Kpone-Katamanso Municipal Veterinary Officer called for tough decision to control the spread, stressing that the mortality rate at some of the piggeries visited was as high as 80 per cent, a situation described as unbearable to the farmers.

Dr Pecku appealed to the farmers not to hesitate to report any form of suspected cases to the designated departments for the necessary actions.

He said more mortalities should be expected in the coming days as most of the live pigs were showing signs of possible infection.

Over 250 pigs have died within the Nmlitsakpo electoral area since the outbreak some few days ago. Meanwhile, other mortalities have been recorded in Kpone and its adjoining communities forcing some farmers to sell out their live pigs to their clients.

Mr Appiah said at Kpone after the field trip, the situation called for urgent action and circumspection in the consumption of pork and its related business, stressing that “we must work together to control the spread”.

The Kpone-Katamanso MCE, therefore, advised the farmers to take precautionary measures to contain the outbreak and assured the farmers that the Municipal Assembly would dispatch the environmental officers to aid in the battle against African swine fever.

In October 2000, the Government declared Ghana free from disease and infection and lifted the ban that had been imposed. During that outbreak, about 600 pigs were lost and 6,927 were slaughtered with compensation awarded to the owners.

Monetization of politics in Ghana said to be bane of country’s...