Africa Education Watch (Eduwatch), has called for broader consultation on the implementation of the new academic calendar by the...
Read more

The Minority in Parliament has called on the Ghana Education Service (GES) and the Ministry of Education to withdraw...
Read more

The Financial and Economic Division of the High Court will today issue orders regarding properties of the Chief Executive...
Read more

There was drama in Parliament on Friday after Information Minister Kojo Oppong Nkrumah described former Deputy Energy Minister John Jinapor as “Papa no.”

This phrase ‘Papa no’ has become popular on social media after actress Tracey Boakye used it repeatedly to describe a married man she claims she and musician Mzbel are in the same relationship with.

Well, it found its way onto the floor of parliament late Friday night as the house approved the Agyapa Royalties Limited agreement.

Minority leader Haruna Iddrisu demanded he withdraws the comment else they wont recognise him as minister, and referred to him as ‘Maame no’. He does not understand why the minister will introduce popular phrases being used on social media in the house.

“You come to parliament to employ those words used on social media, we take strong objection to it. If you don’t withdraw, we won’t recognize you today as minister. We will not. Do what you will do,” Haruna Iddrisu said. 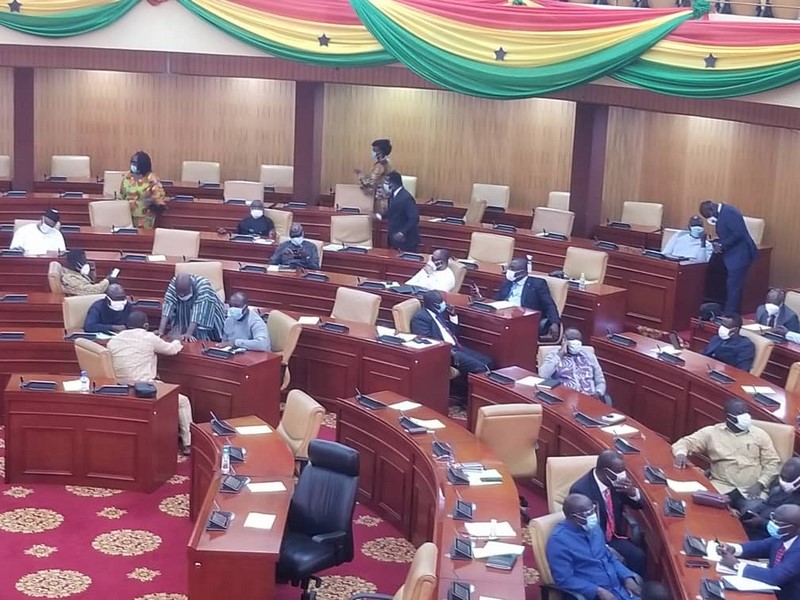 Minority MPs banged the table whilst Majority MPs shouted ‘Papa no’ in the background as the debate continued.

“The honourable minority leader’s anger, I pretended to overlook it because I think it’s in the spur of the moment. And knowing this house, tomorrow, we will get over it. But some insist on making an issue over it.

“I don’t think we will gain anything as a house by pretending this is new. And the threats don’t come to anything. So, the house will proceed,” he said.

The debate on the deal continued after that. Eventually, the Minority MPs walked out of the house in protest of the deal. But the majority went ahead to approve it.

Africa Education Watch (Eduwatch), has called for broader consultation on the implementation of the new academic calendar by the...
Read more
Education

The Minority in Parliament has called on the Ghana Education Service (GES) and the Ministry of Education to withdraw the 2022 academic calendar which...
Read more
General

The Financial and Economic Division of the High Court will today issue orders regarding properties of the Chief Executive Officer of Menzgold Ghana Limited,...
Read more
Sport

By Benjamin Willie Graham Ghana suffered a humiliating group-stage exit at the Africa Cup of Nations after the four-time Champions were beaten by debutants Comoros. Victory...
Read more
Uncategorized

By Michael Okuley, YAOUNDE. The Black Stars have been kicked out of the ongoing Africa cup of nations in Cameroon following their 2-3 loss to...
Read more

Former Speaker of Parliament, Professor Aaron Michael Oquaye, has refuted allegations that he was given military protection while he was Speaker of the 7th...
Read more

By Bubu Klinogo The Minority in Parliament says it is saddened and strongly denounces the withdrawal of the military detail attached to the office of...
Read more

Source: Graphic Online The Ministry of National Security has explained that the Speaker of Parliament, Mr Alban S.K. Bagbin still has security protection and that...
Read more

SOURCE: GRAPHICONLINE Military personnel attached to the office of the Speaker of Parliament, Alban Bagbin have been withdrawn. The officers are WO1 Jafaru Bunwura, WOII Apugiba...
Read more