Scores of NDC supporters protest against EC in Ho

By Doreen Ampofo Government says it could not have afforded the cost of sections of the periphery of the Achimota...
Read more

By Conrad Cadbury The Santrokofi Gbordome LA JHS in the Guan District of the Oti Region may soon be without...
Read more

By Edzorna Francis Mensah What appears to be a fatal accident in the minds of the Ketu Divisional Command of...
Read more

Scores of National Democratic Congress (NDC) members and sympathisers in the Ho Central Constituency of the Volta Region have embarked on demonstration in the regional capital to express their displeasure against the Electoral Commission (EC) on what they described as flawed elections.

This forms part of nationwide protests by the Party’s hierarchy against the EC over the 2020 general election results. 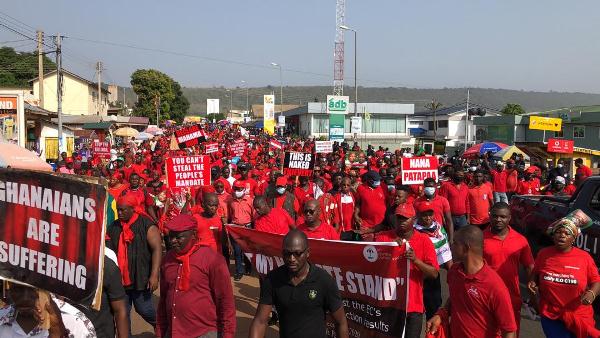 The demonstration was participated by Volta Regional Executives of the National Democratic Congress (NDC), some members of Parliament in the region and party sympathisers who marched through principal streets of the Ho municipality. They held placards that bear resentment against the Electoral Commission (EC) and its Commissioner, Jean Mensa amidst chanting of revolution songs.

The demonstration ended at the EC’s regional office where the protesters were displeased because their expectation to present a petition to the regional director was not met.

The gate of the office building of the EC was under lock and key and no official was available to receive the petition. 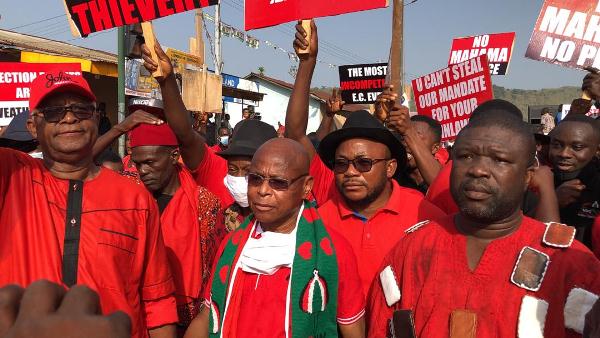 The Member of Parliament for Anlo, Kofi Humado, who participated in the demonstration, was not happy with the EC’s declaration of some parliamentary seats for the New Patriotic Party (NPP). He stressed that those parliamentary seats in contention should be re-collated for peace to prevail in the country.

The Volta Regional Chairman, Henry Ametepe, and some of the protesters commended the security agencies in the region for their cooperation and professionalism during the demonstration and election period.

By Doreen Ampofo Government says it could not have afforded the cost of sections of the periphery of the Achimota...
Read more
Education

By Conrad Cadbury The Santrokofi Gbordome LA JHS in the Guan District of the Oti Region may soon be without teachers if immediate steps are...
Read more
General

By Edzorna Francis Mensah What appears to be a fatal accident in the minds of the Ketu Divisional Command of the Ghana Police Service at...
Read more
Entertainment

Reports reaching GBC news indicate that there seems to be no immediate solution to the strike by Caterers of the School Feeding Programme. A visit...
Read more

By Bright Ntramah Phase one of the Sunyani Airport has been completed and is due to be inaugurated. The second Phase which will involve expansion...
Read more

The New Patriotic Party (NPP) in the Ashanti Region has commenced internal processes for its annual delegates conference for the election of regional executives. Already,...
Read more

By: Franklin ASARE-DONKOH The Ranking Member of the Lands and Natural Resources Committee of Parliament and Member of Parliament (MP) for Tamale North, Alhassan Suhuyini...
Read more

MPs push for commission of enquiry to probe electoral violence