By Rachel Kakraba The ruling NPP continues its regional election of Executives to steer affairs of the party. It will...
Read more

Nana Addo Dankwa Akufo-Addo, the President and Flagbearer of the ruling New Patriotic Party (NPP) has said he would not relax until he wooed Volta Region and its people to his side.

The President wants the Volta Region, which has always been the stronghold of the opposition National Democratic Congress (NDC) founded by a son of the land, former President Jerry John Rawlings, to start voting massively for his party.

Addressing the Chiefs of South Tongu to cut sod for the about €85 million Keta Water Supply rehabilitation and expansion project at Agordome, the President said he was aware of the region’s loyalty to the NDC and that he was determined to win it over for the NPP.

“I’m like the suitor who is bent on marrying a beautiful woman and I’ll keep on knocking at the door until it is open to me.”

This, President Akufo-Addo said he would pursue by relentlessly working to see to the pressing needs of the people including; the water project, which he cut sod for, to provide water to some 400,000 people of communities in the Keta Municipality, Anloga and South Tongu Districts.

He said his government was on a journey to spread development projects equitably in the country with Volta having its share noting, plans were underway for the rehabilitation of the Sogakope-Gbenuakope Road known as the “Hospitality Lane” serving big names like Villa Cisneros and Holy Trinity SPA & Health Farm. 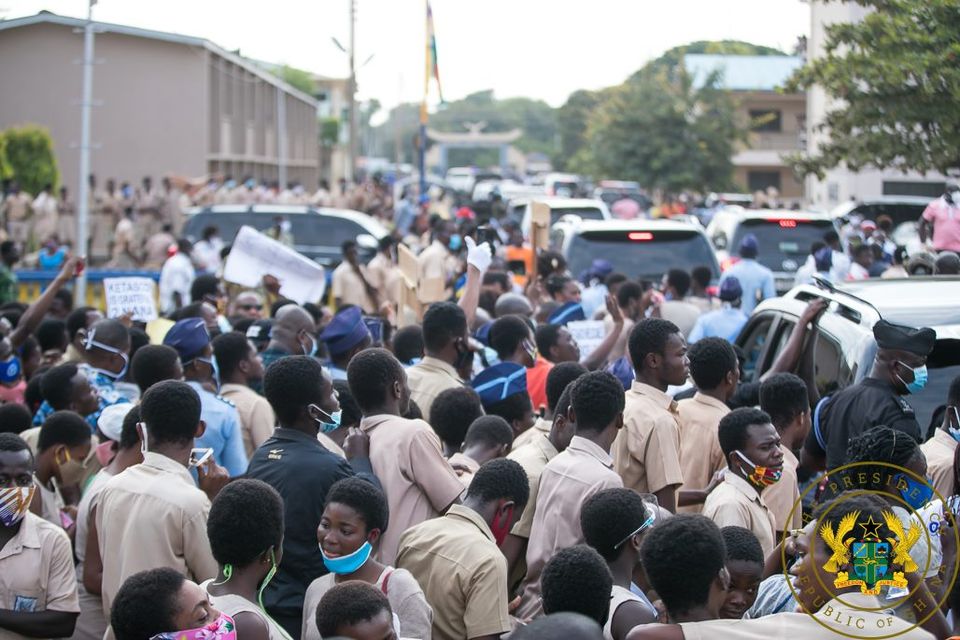 The President mentioned other plans for the region such as the dredging of the Keta Lagoon and the Keta Harbour to open up the southern Volta for accelerated development and urged the citizenry to give “four more for Nana to do more for you.”

The President’s one day visit to the region on Thursday took him to Anloga, earlier, where he met with the Awoamefia of Anlo State and his retinue of chiefs from Akatsi North, Akatsi South and Anloga Districts, Ketu North, Ketu South and Keta Municipalities.

There, he touted his achievements like the creation of the Anloga District, the ongoing construction of the new Assembly Complex and GETFund projects in Anloga, and Keta Districts to justify his second bid and called on people to ignore claims he and the NPP had an ethnic agenda against the region saying, “history will not forgive me” should that be true.

Nana Akufo-Addo disclosed the region was and would remain an integral part of both the Danquah-Dombo-Busia tradition for providing shelter to their forebears, when it was needed the most and Ghana for the composition of the National Anthem and the patriotic song “Miade ‘nyigba lorlor la” by Mr Philip Gbeho and Mr Ephraim Amu respectively.

By Rachel Kakraba The ruling NPP continues its regional election of Executives to steer affairs of the party. It will...
Read more
Sport

By Helga Goka The Black Stars of Ghana will commence preparations for the 2023 TotalEnergies Africa Cup of Nations...
Read more
Politics

By: Franklin ASARE-DONKOH The Majority Caucus in Ghana’s Parliament has described, as unfortunate, the directive from the Speaker for...
Read more

By Nana Ama Gyapong Maurice Ampaw, a Ghanaian Lawyer has disclosed that due to Sir John’s will being on...
Read more

Somali militants holed up as battle rages in Mogadishu